You Know It Has to Happen 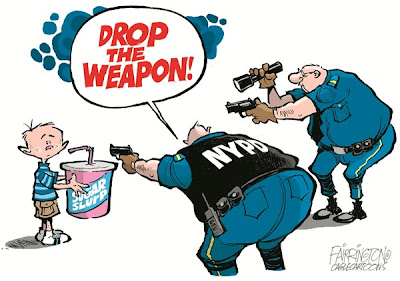 (Cagle Cartoons)
You know it will happen, because any interaction with government wherein a civilian says, "No" eventually ends with guns in the civilian's face.  What I want to know is what piece of law gives that ass clown Bloomberg the right to do what he's doing?  Most tyrants pretend to be following the law, right?

Confidentially, Mayor Bloomy, I don't need to do any business with anyone in your city and see no reason to ever visit.  If I want to smell urine, I can do that any time.  If I need New York levels of intensity, there's a bus station not that far away.

Posted by SiGraybeard at 7:32 PM