The Least You Should Know – Electronics 2

In the simpler days when I first started playing with electronics, 45 years ago, a battery charger for cars or any lead acid battery could be made by using a couple of diodes to rectify low voltage out of a step-down transformer, perhaps with a capacitor to smooth the resulting pulsing DC, like this (ammeter optional): 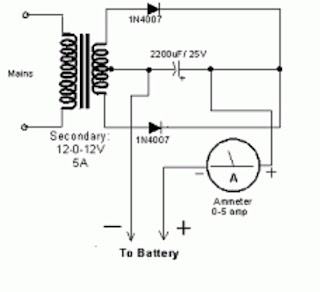 In addition to charging your car battery, this would run anything that ran on 12V at 1A or less – especially if it was intended to run on a car battery.  The diodes called out, 1N4007, are rated for 1000V reverse.  A 1N4001, rated at 50V, would work fine here.  There’s a series of parts between those two diodes; any one of them would work.

By the way: it’ll work as well today on starting batteries, or sealed lead acid batteries (SLAs or gel cells).  If you have a battery powered drill with an SLA battery, its charger is probably a lot like this inside.  Not all lead acid batteries, though: with AGM batteries, a little more circuit sophistication helps. Other types of batteries require different types of chargers.  Lead acid batteries work well with constant voltage chargers like this.  Nickel cadmium (NiCd or nicad) batteries work better with constant current chargers.  If you try to fast charge NiCd batteries, they can overheat and explode, so fast chargers should have thermal cutoff systems.  Only specially designed batteries should be charged on a fast cycle charge.  Chargers are usually specified as the percentage of capacity they charge, such as 0.1C (overnight chargers – really 14 to 16 hours at 1/10 capacity).  With chargers that supply 0.1C, Nicads can be left on the charger; higher capacity, fast chargers need to shut down.

Lithium ion batteries present special problems.  While they charge under constant voltage, a lead acid battery can be left on a charger and it will essentially self-regulate; the term is that it can tolerate overcharge.  A Li ion battery charger must be shut down, it can’t tolerate overcharge.  If left on, it can plate lithium and that can lead to unpleasant things like fire and explosions.  With the exception of managing charge termination, they are considered pretty easy to charge.  This leads to some electronic sophistication in the charger.


With a conceptually small change added to that battery charger, it becomes a power supply for anything that runs on 12V.  What is added is some way to regulate the output voltage so that changes in the input voltage or the load current drain does not affect the voltage delivered.  Voltage regulators are a topic of their own, and cover a wide range of complexity.  For many, many uses, there are simple, three terminal regulators that will provide great performance for low cost, although they tend to be for only a few amps of current at most.  The only disadvantage of these parts is that they are not extremely efficient.

(source)
Charging batteries is important, and will be close to your number one priority after the SHTF, because without energy nothing is possible.  The series on a small solar power project talks about chargers between your panel and batteries, so I don’t want to go there in this series.  More information here.

This is a good time to talk about a reality in electronics today.  While the vast majority of functions can be implemented with a handful of transistors and passive parts, the level of abstraction in the parts we use keeps going up.  Instead of making a voltage regulator with discrete parts, say three or four transistors, a diode or two and a handful of resistors, most of the time we’ll use a single integrated circuit or IC (and sometimes called a chip).  Because additional transistors on an IC are dirt cheap (literally: the raw material is sand), they can throw a lot of circuit sophistication at a problem and get excellent performance, while simultaneously lowering our parts count.  Going to higher levels of integration – more functions on a chip – makes the products, smaller, lighter, usually cheaper, more reliable and perform better.  Put another way, you couldn’t possibly make even the audio portion of an iPod nano from discrete transistors and other mid-1960s technology.  It would be way too big.  And the amount of memory in one of those things would easily fill a desk if made out of discrete FETs.

The power supply in your PC, and most other modern electronics, is a switching mode power supply, also called an SMPS, or simply a “switcher”.  The way a switching regulator works is entirely different than a linear regulator.  In a linear regulator, the output voltage is essentially compared to a desired reference, and the output raised or lowered to return it to the right value.  It’s on all the time, and adjusted in an analog manner (smooth, continuously changing voltages).  In a switcher, a higher voltage than you want at the output is switched on and off, and the resulting pulse train smoothed out (filtered) to give a DC voltage.  This voltage is compared to the reference, and instead of adjusting the value of the switched voltage, we adjust the amount of time the output is fully on until the filtered voltage is what’s desired.  This process is called pulse width modulation or PWM. 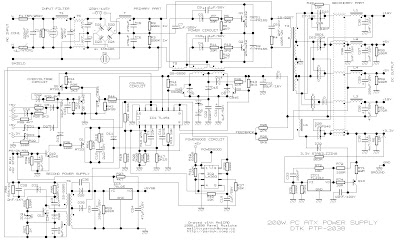 (200 W PC (ATX) Power Supply)
The basic supply shown above as the battery charger is not a very efficient device, 30s to 40s % for example.  By contrast, a switcher can achieve efficiencies of over 90%.  The most efficient switchers have a fixed input and a very stable load, so switchers designed for PCs can be quite good.  If you’re going to put a switcher on a variable AC line (poor regulation of voltage or frequency, like a cheap generator) and put a load that varies tremendously, like a radio that goes from requiring an amp in receive to 20 amps in transmit, the switcher won’t achieve 90%; more like 75-ish percent.  Still, that’s better than 35.

Switchers have largely replaced “linear” power supplies (transformer, rectifier, and regulator) in most products, but they have a drawback.  Fast switching generates harmonics, multiples of the switching frequency, and these can interfere with radios.  Hams and other radio hobbyists routinely avoid switchers because of this.  It might interest you to know that every military and civilian radio system I’ve worked on since about 1985 has a switcher in it, and we can live with them.

More analog to follow.
Posted by SiGraybeard at 8:12 PM