I Think I Found My Retirement Place

In the emails from friends today, a "secret" NATO submarine base in Norway is for sale: 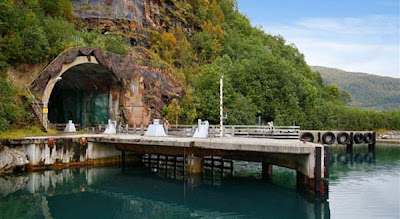 According to Yahoo, NATO spent almost half a billion dollars building this thing, and is willing to sell it for $17.3 million.


The full above-ground space measures 13,500 square meters, including the opening at the side of the mountain. It's the 25,000-square meter space within the mountain that makes it oh-so-interesting, though. While you'll find mundane rooms like ordinary offices inside the property, it also has a dry dock for submarines and boats as well as a tunnel system, because no hideout or lair is ever complete without them.