In which tonight's episode can be entitled "You Don't Need to Outlaw Guns - You Just Need to Outlaw Shooting".  Either the "Nudge" tactic, or the full linebacker hit tactic.

The Volokh Conspiracy links to a story of OSHA attacks on indoor shooting ranges.  In an investigation of the Illinois Gun Works indoor range, to borrow the words of Jim Stafford,


One day this feller from Washington come by
And he spied us and he turned white as a sheet!

To quote from the original link:


Many of alleged OSHA violations at the safety training range involved noise exposure for the instructors. Among OSHA’s suggestions were to eliminate training in “larger caliber” handguns such as “9 mm Luger and/or .45 Colt”  and substitute “handguns of smaller caliber,” such as .22LR. And “Prohibition of any shotguns and/or rifles firing in the firing range.” (p. 6). In other words, eliminate training for all firearms except those which are least likely to have the stopping power to be effective for self-defense. And ensure that the range can never provide students with personal instruction in the use of the firearms which constitute the vast majority of firearms which people actually own.

In addition to thinking the noise was too loud (all together now, THEN TAKE SILENCERS OFF THE NFA LIST), they were shocked, shocked! that someone might have to touch a round of ammunition without gloves.  Dudes, if you're worried about the miniscule amount of lead dust in that environment, you're done with your job.  Workplaces are safe now.  Everyone go home and start looking for honest work.  And - seriously - man to man - if you think 9mm Luger is a big, loud  major caliber, you might want to check into an addadicktome or those little blue pills.  Just sayin'...

The one that I got the biggest laugh out of was this:


...employees used Hoppes #9 solvent for cleaning guns, but Illinois Gun Works had not relabeled each Hoppes bottle to list all the hazardous chemicals therein. (pp. 54-55).

Only an OSHA weenie would complain about this, because most of us love the smell of Hoppes #9!  They even make an air freshener that releases the scent 24/7 so we can get more of it.   Besides, what good does labeling the containers do?  Sure, you should clean your gun with adequate ventilation - anyone with an IQ above room temperature knows this - but simply labeling the chemicals doesn't make them any less dangerous. 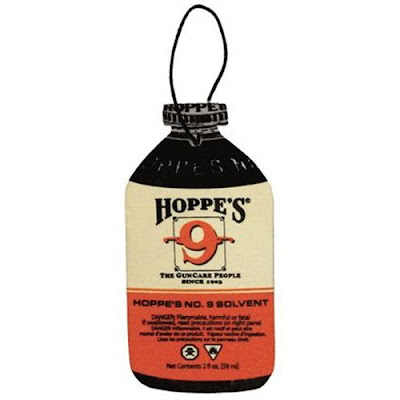 OSHA is a serious impediment to business in this country and while I joke about this, they're deadly serious.  In this case, they've assessed fines of $111,000 against this little shop.  Like most government single-issue focuses, they've cycled through the Pareto chart enough time to be just working on unimportant things, but they keep tying businesses up with expensive regulations that lead to tiny marginal improvements if any improvement at all.  They may have improved worker safety 40 years ago, but now they're pretty much useless.   Their terror over the lead dust is a great example.  When the EPA started, there was widespread lead in the environment, and that has been reduced to tiny fraction of what it was, largely by requiring unleaded gas and getting the lead out of paint.  The shooting instructors aren't making lead products, they're encountering micrograms of the metal.

Personally, I think there might be another dynamic at work here, too.  This shop is just outside of  Chicago.  So what major city is involved in a tax-wasting war against its citizens to prevent the McDonald decision from being implemented?  What city was trying to regulate gun permits out of existence by requiring applicants to travel long distances to practice at ranges that don't exist in the city?  What city is run by Rahm Emmanuel, who served in the same administration as Cass Sunstein, the Czar of Nudge?

Coincidence?  Oh, I'm sure.  Nothing to see here.  Move along.

The question is whether this is going to spread out and hit many more ranges.  If it does, you can expect fewer ranges, at the very time we need more and more ranges due to the incoming new shooters.