V'ger Has Left the Solar System

According to my homies at the JPL, Voyager 1 has left the solar system.  Voyager 1, immortalized as V'ger in the first Star Trek movie, is the first object humanity has made that has left the solar system.  She will eventually be followed in that distinction by sister Voyager 2 and the Pioneer 10/11 spacecraft.  Although launched before the Voyagers, the Voyagers have a higher velocity than the Pioneer 10/11 craft, and overtook their distance (all four are going in very different directions). 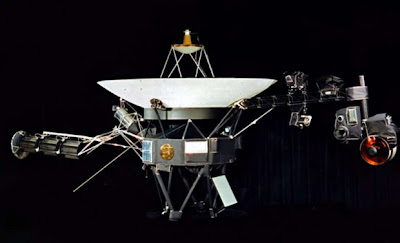 Voyager 1 is in the 35th year of a 5 year mission.  Her radioisotope thermal generators are expected to keep the few functions running alive until 2025.  Then she will go silent and eventually cool to almost absolute zero.

If we are lucky, some day a ship from Earth may find her and bring her back to whatever serves as the equivalent of the Smithsonian in those days.

In all probability, she will simply follow the Newtonian laws of motion, cool to a couple of degrees Kelvin and glide away forever, all alone in the night.