I Saw the Headline But Didn't Know the Story

So thanks to Popehat for the introduction to Martha Payne, 9 years old, of Scotland.  Martha isn't your typical 9 year old.  Martha has a blog, NeverSeconds where she writes about her life, and most often about her school lunches.  It appears that she would photograph her lunch and comment on it every day.  She wasn't nasty or vulgar; on the contrary, she's polite, well-spoken, and writes with a nice voice.  Over time, her blog started to get popular, and talked about.  Folks liked it.  When she started developing an audience, she started collecting for a charity, so that kids in other places could eat a better school lunch every day, too.  Why does it seem inevitable that, for a while, she was the center of an international news story?

Martha, known as Veg on her blog, posted this yesterday:


This morning in maths I got taken out of class by my head teacher and taken to her office. I was told that I could not take any more photos of my school dinners because of a headline in a newspaper today.

Late today, it seems the "Argyll and Bute Council" - the local government - has retreated and is allowing Veg to be herself again.

Go read Popehat's story - and then go visit Veg at NeverSeconds.  It might just warm your heart. 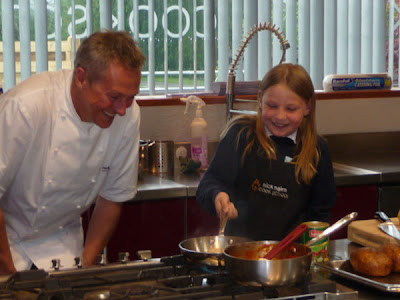 9-year old Veg.  Clearly a threat to the local order.
Posted by SiGraybeard at 10:08 PM