"Obama Campaign Spent More Than it Made in May"  Really?  Obama, the guy who has never seen a federal budget with less than 35% more spending than revenue?  He spends more than he makes?  Would would have guessed?


The campaign and the Obama Victory Fund, a joint fundraising committee with the Democratic National Committee, raised more than $54 million last month, but they spent $69 million.


And what has all that money bought them? Statistical dead heats in formerly blue stalwarts like Michigan and Wisconsin.

While I'm on the topic of The One, go read Sultan Knish's latest on Obama, King Con: the Legend of Obama.


Before Obama lied to America, he lied to the left. Before he cheated us, he cheated them. Now he comes to them with some pink underwear and a tricolor sombrero and the people he conned eagerly cheer for him, the way that Madoff's investors cheered when despite all the investigations around him, he sent them a check.

"If it was all a scam, why would he be sending us money? If it's all a scam, why did he endorse gay marriage and illegal aliens?" That's the mark's question that hangs in the air and there is no answer. The question is already the answer. If you're looking for proof that you haven't been conned, it's the best proof that the con has already happened.

and dig on Sultan Knish's artwork: 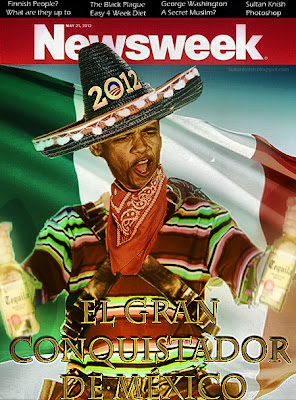