WIll Google be Gone Within a Decade?

There's a few factors that tell me Google will probably be gone before too long.   The biggest threat is that Steve Jobs swore he would spend every penny Apple had to destroy them, and Apple appears to be working on doing it without going broke.  Rumors coming out about iPhone OS 6, currently expected to be released this fall, put some meat on the bones about the methods they're taking.  Google gets the majority of its revenue from those ads that show up in search results.  Apple is going to cut iPhone customers off from Google.  While I would assume anyone who wanted to get there still could do that with a browser, iOS6 will no longer feature Google Maps - an "entry drug" into the Google system.


Apple will instead run its own mapping app, which has a high-quality 3D mode, on the platform.

There are many more aspects to how Apple appears to be mounting an attack on what they see as the next battleground.  A slightly earlier report, before the developers conference, from Kurzweil AI said,


It was widely reported yesterday that Apple will likely announce at its WWDC in June that the new version of the built-in maps app in iOS6 will not be fed by Google maps. Instead, Apple has developed its own, in-house 3-D mapping database, based on the acquisition of three mapping software companies between 2009 and 2011, Placebase, C3 Technologies, and Poly9.

For a demo of their new mapping technology, see the video at that Kurzweil AI link or here. It's slick.

The other factor to consider in Google's decline is their stupidity.  Last week, I read on an internal forum at work that Google Shopping is no longer showing any results related to shooting, guns or ammo.  Word of this is getting around, but We The People has posted the email from Google in its entirety.  The email policy talks about the obvious things - no fraud, provide a valid link to the right product - but never says why they don't approve of hunting, target or competitive shooting.  Lacking a clear explanation, it then seems to imply that they are banning all links related to firearms because:

For their part, Google Shopping issued a terse, "We do not allow the promotion or sales of weapons" statement.  Obviously not members of the gun culture who are all keenly aware that the weapon is the mind, the gun is simply a refined tool.  One could use dozens of things they do allow links to as weapons.

I don't need to remind you that firearms and ammo sales are one of the hottest areas in all of retail right now.  The Wall St. Journal is a little mixed about why that might be, but clearly reports that S&W is reporting all sorts of records and while Sturm, Ruger may not be doing as well, they're doing quite well by most company's standards.  Unless I miss my guess, the real surge in sales for the election hasn't even started yet, and I expect the health care ruling to give gun sales another kick.   NICS background checks pretty much just keep going up, year over year.  But Google has just said they will not sip from the cool waters of that revenue stream. 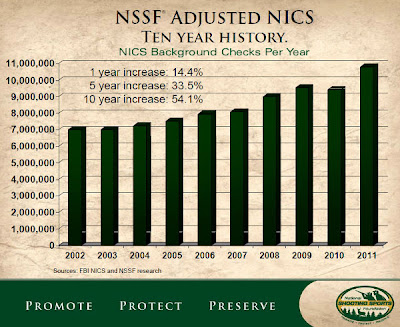 (source)
It might be that the Google 's board of directors has suddenly thought they could be sued if a gun bought through their linking service was tied to a crime, but what about liability for anything?  Not a weapon, but what if water filter doesn't work or a bike breaks?  Or what happens if the camping ax or a hammer or a Mont Blanc pen is used as a weapon?  You can't make or sell anything without risk of lawsuit, so why just bar guns or ammo?   With this sort of management, they're cutting their own throats.

In my view, here you see the deadly duo:  gutless management on one side and a ruthless competitor on the other.  My guess is it's already over.  Unless something changes, the rest is mere formalities.