A scrap wood/spare time project: a cutting board made from scraps sold as pen blanks.  I bought these a while ago - so far back I don't recall.  When I got my first lathe, I went through a bit of a pen turning phase, so it would have been then; maybe '04.  I made a few pens, gave away a few, and kind of lost interest, because how many pens can you fill a house with, especially when decent pens are really cheap?  Sometime around then, I bought a box of pen blanks off eBay.  With the exception of some exotically priced exotic woods, what "box of pen blanks" usually means is some scraps about 5/8 to 3/4" on a side and five or six inches long.  This box had maple, cherry, oak, and a handful of some exotic woods.  Those are fine for a pen if they're highly figured, but these weren't. 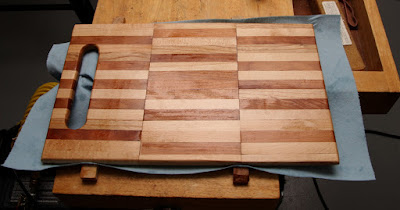 A few weeks ago, while bouncing around on Pinterest, I came across some fantastically beautiful cutting boards.  Real works of art that artists put a lot of effort and time into (like in this 15 minute video).  Here's an example that's not extremely involved.

It gave me the idea to play around with my cherry and maple pieces and see if I could come up with an attractive pattern; it grew until I used all of my maple and had to put some oak in there.  It still wasn't a dozens of hours project, and you can see my share of mistakes, but it was a fun way to spend some time.  I probably spent more time sharpening my plane and getting some tools running that I haven't used in years than actually woodworking.  The mottled appearance is from taking the pic as the first coat of mineral oil sinks in.