For Those Curious About How the Fix Came Out - Pic Heavy

Reference to the post showing my goof of a circular counterbore in a spacer (and the link is there for people who find this post some time in the future and don't know about it).

First, a little background.  The part is a spacer on the Y-axis of the milling machine that holds 24mm diameter ball bearings on both ends.  The two bearings are built from what looks from the outside like a washer on either end and a set of ball bearings in a frame (they can't fall out) between the washers.  The washers have a groove on them that the balls roll in.  Also, the bearing sets are not exactly the same size: the inner bearings have a slightly larger inner diameter hole than the outer bearings.  I screen-captured the block with the front bearings in place and the back parts of that bearing set in place on the shaft from the video provided on the CNC conversion DVD I'm using as my source.  Just to emphasize, what I'm machining is the red block.  It goes on the leadscrew shaft below it. 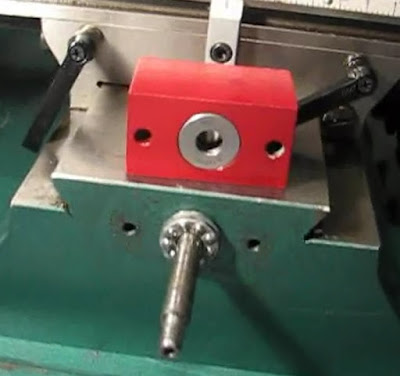 The reason for the .360" deep, .945" diameter counterbore is to hold these bearings.  It seems like the most important dimensions here are the depth of the counterbore and that the bore is in centered properly.  The slop in the outer ring seems more cosmetic than anything, since the races can't shift around and the ball bearings are also captive.  At one point in the video, Hoss says to make sure there's enough room for the washers to rotate in the bore to ensure they can rotate around the shaft.  I'm not sure how much slop there should be, but the bearings are said to be "24mm", which is 0.9449 inch and 0.945 is only 1 tenth (of a thousandth) bigger than that.  I'd imagine it could comfortably handle a few thousandths.

Yesterday, I decided to see how the hole would work out with my corrected G-code, which should center the hole better, but leave the gap (Wednesday's goof), on the left side.  Everything was still in the same fixture from Wednesday, so I ran the corrected G-code.  (I spent Thursday watching all the videos on how this works - again).  That's when I realized I didn't have any way to measure that now oblong, weird hole, to make sure it was the right diameter.  I put that on hold and turned a piece of 1 1/2" aluminum bar down to 0.945, about half an inch long, as a homemade gage plug.  It didn't fit.  I noticed that while the circle was being cut, it would hesitate at the cardinal points.  If the 0 degree point was on the positive X-axis, it would pause - briefly but perceptibly - at 90, 180 and 270 degrees.  The 90 and 270 degree points were too tight and I could see the edge was actually too far in at those points - it wasn't a smooth circle.  I started trying to round them to shape with a half round file, and then realized I could put the end mill in position to smooth out those points and did that manually.  The plug then fit in place.  Right side: 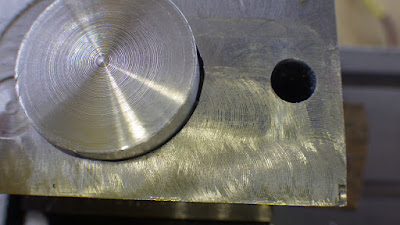 and the boogered left side: 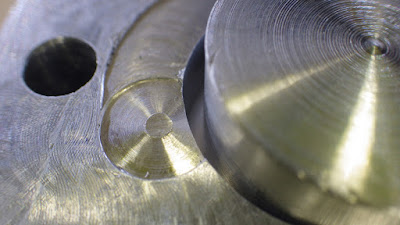 You will notice the right side isn't smooth and symmetrical either, and I'm not sure I know where that came from.  It must have come from one of my misguided attempts to fix things.

Finally, I turned the block over to do the other side (it's dimensioned exactly the same), re-verified my 0,0,0 point, and ran the corrected code.  The plug didn't fit!  I was able to quickly determine that the milled circle was too small by around 10 thousandths radius - which is a pretty big error.  I then spent a little while closing in on this size by bumping the starting point to the right and extending the radius of the cut in the circle cutting command, enlarging the circle. 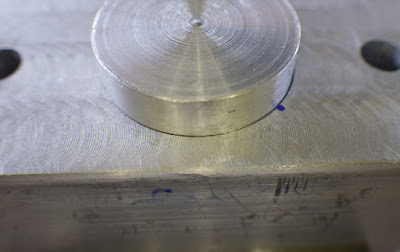 In the "lessons learned" department, I noticed several things about my existing CNC system while doing this that I need to investigate.  Even though it was in aluminum, a relatively soft metal, cutting this circle at 5 IPM (inches per minute) resulted in a rougher circle than feeding at 2.5 IPM.  The top side was initially cut at 10.  By the sound of the motors, nothing is getting bogged down at 10.  Yes, it sounds like it's under heavier load at 10 than 5, but I didn't think it was enough load to make a difference.  I think one explanation for the irregularity of the circle could be backlash, and it might be good to re-check and re-verify all the settings I have previously entered into Mach3, my machine controller.  Another explanation is that the Sherline is a light duty machine, much lighter duty than the one I'm building will be.  It might be that during some cuts, there was enough flex in the machine that the cutter wasn't where it should have been.  In that "Left side" picture in the middle up above, there's a big, obvious, circle that's obviously deeper and possibly even wider than the track it was cutting.  This is where I stopped the path, seeing it was very wrong, and the different depth there is from the cutter simply sitting there and spinning before I commanded the motor to go up and get the cutter out of there. That sounds to me like perhaps the Z-axis is settling down, letting it's compression out like taking the load off a spring, while everything  else sat there.

The biggest lesson learned of all is that I probably should have put this in the four-jaw chuck and cut the center hole and counterbores on the lathe.  I didn't do that because going between machines means losing the alignment, and I wasn't sure how to index from the middle of the hole.  Right now it doesn't seem like a big deal.  I'd just put it on the mill and set it up the way I did this time.

Hope this is useful to someone!