Yesterday, I completed the antenna tower project I've been working on since December.  Around noon, I cranked the tower over to start doing the other odd jobs it needs, and those will take much less effort than everything up to this point.  Antenna maintenance is a regular, annual task. 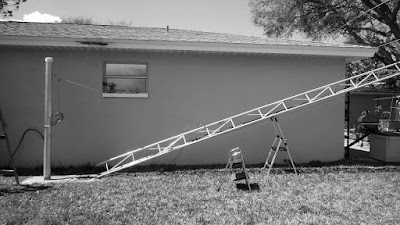 This morning, I checked the antenna connections and the Coax Seal compound I had used (known in the biz as "monkey poop").  Everything was acceptable, but the seal was getting a bit oxidized and ratty looking.  I'm pretty sure that there would have been problems if they were up for another monsoon season and I was doing this next December.

The house bracket (the dark horizontal line above the base of the tower) was partially inaccessible until the tower was down, so I didn't know if it would need work or not.  Thankfully, it didn't.  There was a little rust on the parts of the bracket I could see and knew about already, and all of that cleaned up pretty easily with a wire brush.  After wire brushing the entire bracket with a rotary brush in my cordless drill I sprayed the whole thing with a rust converter.  This needs 24 hours to cure (although I suspect our 87 degree afternoon will reduce that a bit).  Then I'll paint it white to match the house trim.  Meanwhile, I'll build a replacement for the two by four that clamps the tower to the house bracket.  By the time the white paint has cured, all the other antenna and ground wire maintenance will be done so I'll put the house bracket clamp on, crank up the tower and we'll be ready to rock and/or roll!