A couple of things since the start of the year have given me thoughts of making a CNC laser for light duty (pardon the pun).  First, Come and Make It posted about a 40W CO2 laser he was working with.  Then, about 10 days later, while wandering around the Orlando Hamcation, I stumbled across a small business that uses a small CNC laser to produce laser-engraved (burned) wood products as little gifts for hams.  As far as I know, that doesn't require a lot of power, but the prospects of a laser paying for itself (eventually) is appealing.

I've always been the kind of person that can put an idea on a mental back burner and not pay conscious attention to it, but ideas will simmer back there and pop forward into my brain without calling for them.  So this idea went onto a back burner.

Meanwhile, I'd notice things like a laser engraver made from the laser in a DVD writer on YouTube (there are several).  Then the step up in burning power to the blue lasers from a Blu Ray player.

This morning, I ran into this little project on Instructables, while bouncing around in Pinterest. 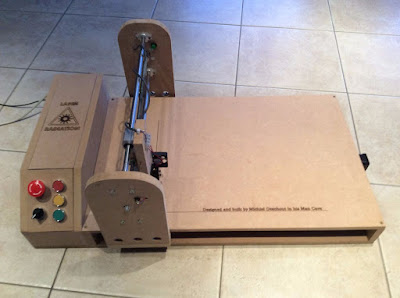 The back burner is starting to boil over.  I have an X/Y platform; it's called my CNC Sherline.  I don't have any immediate need to engrave a large plaque, so work area isn't an immediate concern.  But how hard would it be to replace the motor and headstock on my Sherline mill with something to hold one of these "couple of watt" blue laser diodes?  It would take a bit of learning to know how to turn the laser off and on, but learning is what we're here for, right?  A constant-current power supply?  That's home field; I can design those in my sleep (and I think I have).  How hard can it be?  (ooo Right up there with "what could go wrong" or "all you gotta do")  Hey!  I've got a junk DVD writer around here somewhere...