I Think the Summer of '68 is Coming

The rent-a-mob protesters who disrupted a Donald Trump campaign event in Chicago last Friday, a mob organized by MoveOn, Black Lives Matter, union groups, and their fellow George Soros funded groups, are promising a new version of a "Summer of Rage".  For now, they're calling it Democracy Spring.   They're threatening “civil disobedience on a historic scale” and to bring chaos to the primary season.


“This spring, in the heart of the primary season, as the national election begins to take center stage, Americans of all ages, faiths, political perspectives, and walks of life will bring the popular cry for change to Washington in a way that’s impossible to ignore: with nonviolent civil disobedience on a historic scale,” the movement’s website states.

“We will demand that Congress listen to the People and take immediate action to save our democracy. And we won’t leave until they do — or until they send thousands of us to jail, along with the unmistakable message that our country needs a new Congress, one that that will end the legalized corruption of our democracy and ensure that every American has an equal voice in government.”

The group vows to use marches, sit-ins and other forms of non-violent protests to make “this election a referendum on whether our democracy should belong to the People as a whole or to the billionaire class alone.”

Bill Ayers "Rules For Radicals" in action, right?  It's not like he's distancing himself from the protests; he was photographed and interviewed on video at the protests. 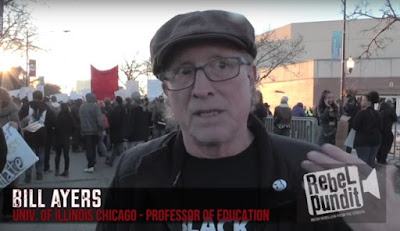 Monica Crowley has an explanatory piece in the Washington Times, called "The Left Gets the Band Back Together for 2016" which gets it pretty well.


The radical left will never tolerate a disruption to its revolution to “fundamentally transform the nation.” When leftists detect pushback that threatens its grand project, they attack. And now, following their successfully orchestrated assaults on the Tea Party movement, Mitt Romney’s 2012 candidacy and conservative principles more generally, they are putting the band back together for another national tour.


The leftists must kill the counterrevolution as symbolized by Mr. Trump. This means using any and all tactics, including the heckler’s veto: mobilize the mob, deploy it as a weapon, and then use the threat of future violence to shut down events and smother dissent (as they did successfully with Mr. Trump’s Chicago event). They then blamed Mr. Trump’s policies and rhetoric for creating a hostile environment in which clashes were inevitable.

This is not about Mr. Trump or what he says or does. It’s not about the GOP. This is straight out of the Alinsky playbook: create chaos, blame the victim, stop free speech and advance progressivism. It was particularly pathetic to see some of Mr. Trump’s rivals and other conservatives blame him as well.

These groups are promising protests until they either get their way or they're all locked away (which, frankly, ain't gonna happen).  I hope the contradiction that a group calling itself "Democracy Spring" intends to get their way by shutting down the democratic process isn't being missed.  You may have seen the photo that Miguel posted at Gun Free Zone of one of the useful idiots with a Tee Shirt message, which I'll grab: 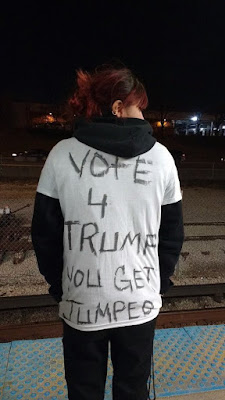 I'd like to ask the little useful idiot just exactly how she'll know who anyone votes for?  Since she can't know, the threat translates as, "if I think you look like someone who would vote Trump, we'll beat you". Someone who might vote for Trump?  Why, an angry white person!  Any one will do.  There have been several places where people have threatened that if Trump gets elected they'll start attacking whites everywhere.  Miguel has one from Twitter in his post.  I've seen them in several places.

I recall the protests of '68 to some degree (it was almost 50 years ago after all), and I think these groups aspire to that sort of destruction.  Baltimore, Ferguson and other riots in the last year are rather reminiscent of the riots of '68.  The big question is whether they'll riot at the Democratic National Convention like in '68.  Actually, the only thing hasn't happened in this old-hippie-led rehash of the 60s is the assassinations.  That could happen at any time, and I frankly expect it.  Many of you have said the same. 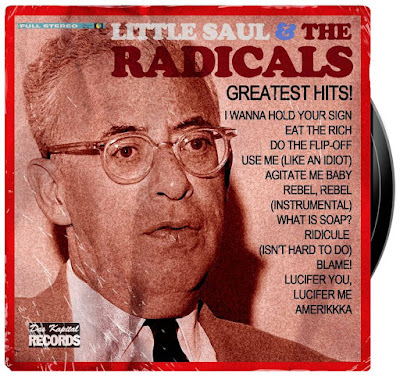 Labels: commies and other idiots, octopi whatever, politics, the big picture