Je Suis Sick of It 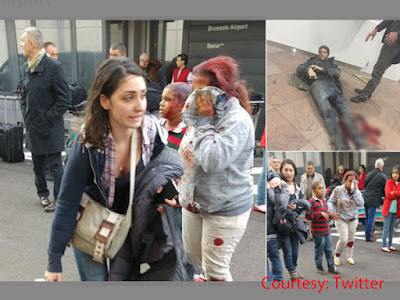 Yet again, the civilized world has to bear the depraved antics of the Muslim murderers.  Yet again, we have to bear the pea-brained apologists telling us, "it's the religion of peace" or "it's just a small minority".  Yet again, we watch the world respond with hashtags, colored light tributes, and other meaningless, feel-good wastes of time.  Yet again, it looks like we're fast approaching the time when the choice of fight, convert or die will be at our doors.

President Community Organizer said there's no way the Islamists can defeat us.  That the most they can do is annoy us or frighten us.  Stuck thinking 1st or 2nd generation warfare, when what's happening is way beyond him.

If John Robb is right in these two posts, we're in for a period that will end in either the financial collapse of the entire west or an almost-complete elimination of any freedoms.  Or both.  The only thing arguing against his point in the first link is that the Islamists don't seem to do that sort of thing.  They seem to only want to kill, not do the things that might get the reaction he talks about.

I wouldn't dismiss John's ideas, though.  Both of those pieces are worth reading, and are fairly short.

Posted by SiGraybeard at 4:23 PM