It Depends on How You Look at It

Or sniff at it. 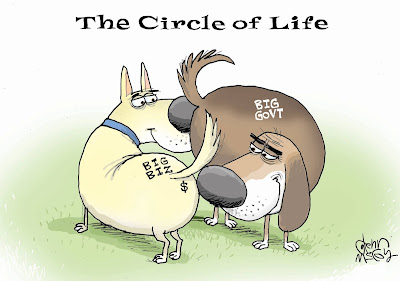 My justification is that no company has ever sent a SWAT team to raid anyone's house because they didn't buy something.  As much as Microsoft or Apple or any big business wants my money, they have to get it by persuasion and if I'm not persuaded, they're SOL.  In contrast, Uncle Sugar, or my state, my county, my city, or even some new taxing authority I didn't even know I was assigned to, could present me with a new tax bill, and as the story at the link describes, if I say 'no' there's a good chance someone in this house dies.

But the moment the government got so big that it was more profitable to go lobby congress than it was to spend that money to make their product better, this cartoon became inevitable.   When senators are cheaper than R&D and provide better ROI, senators will be what's being bought.

At least that's how I look at it.