Well This is Kind of Embarrassing

For the last several months, more consistently since I retired, I've been making the metal parts to convert my G0704 milling machine to CNC control.  So far, every part has been usable.  (Perhaps I should say "appears usable"!)  Today, I mentioned to Mrs. Graybeard that I hadn't botched any part.  Everything seemed usable.  So you know what happens next, right?  It's like saying, "our pitcher has a no-hitter going" or, "gee, I haven't had a flat tire in years".

Immediately after that, I went out into the shop and made my first piece of scrap. The last piece on the list to make is a spacer for the Y-axis.  It's a block of aluminum, 1 3/8 by 2 1/2 on the face and 1 1/2" thick.  It has three through holes: two that are 1/4" diameter and one 0.406" (13/32).  The big hole is counter bored an odd size: 0.945" diameter by 0.360 deep, on both ends.  After examining all of the options I have for cutting a flat bottomed hole like that, I decided to use an end mill and use an interpolated circle cut.  This can be done directly in G-Code, a circle is a single line command and to cut out a circle like this is a four line subroutine repeated: go to the center to drop the cutter, step to a new depth, go back to the circle, cut a new layer deeper, and repeat.  To make it sound even easier, I just did that a few days ago to complete my Z-axis motor mount.  Only problem is that I punched in a wrong number in my calculator, coded it wrong and made the circle off center. 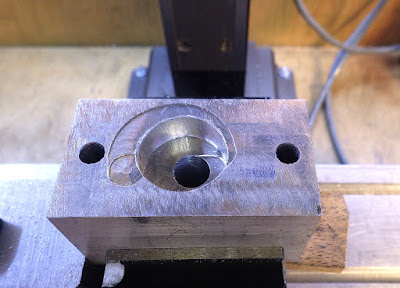 Actually, it's worse than that.  I barfed it up twice - as you can see.  The first path, which I aborted before it cut the first layer, was way far off.  The second was barfed up differently.  In both cases, the root cause of the problem was that I did it in my head without checking it in my CAD program.

There's an old saying that there's no such thing as whiteout for metal, so measure twice and cut once.  This is why.  Let my bad experience be your learning experience!