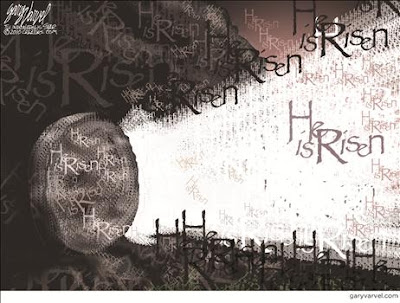 Looking for the Living One in a Cemetery

24 1-3 At the crack of dawn on Sunday, the women came to the tomb carrying the burial spices they had prepared. They found the entrance stone rolled back from the tomb, so they walked in. But once inside, they couldn’t find the body of the Master Jesus.
4-8 They were puzzled, wondering what to make of this. Then, out of nowhere it seemed, two men, light cascading over them, stood there. The women were awestruck and bowed down in worship. The men said, “Why are you looking for the Living One in a cemetery? He is not here, but raised up. Remember how he told you when you were still back in Galilee that he had to be handed over to sinners, be killed on a cross, and in three days rise up?” Then they remembered Jesus’ words.
9-11 They left the tomb and broke the news of all this to the Eleven and the rest. Mary Magdalene, Joanna, Mary the mother of James, and the other women with them kept telling these things to the apostles, but the apostles didn’t believe a word of it, thought they were making it all up.
12 But Peter jumped to his feet and ran to the tomb. He stooped to look in and saw a few grave clothes, that’s all. He walked away puzzled, shaking his head.
Luke 24:1-12  Message Translation

If you haven't, I urge you to read "Five Confounding Facts About Jesus' Resurrection" at Sense of Events.

Easter is the most important day in Christianity and far more important than Christmas because of the resurrection.  Everyone has a birthday, but only one man in history has been resurrected.  So since virtually everyone, including honest atheists, agrees Jesus was a real man in history and died on the cross, the question becomes whether or not it can be verified that Christ was seen after the resurrection by someone other than the closest circle of disciples.  An experienced legal/crime writer, Lee Strobel knew the essence of the question is the resurrection, and independent witnesses are the key.  The gospels talk of Jesus appearing several times, but what about other historians?  Sobel writes:

Could these encounters have been hallucinations? No way, experts told me. Hallucinations occur in individual brains, like dreams, yet, according to the Bible, Jesus appeared to groups of people on three different occasions – including 500 at once!
...
In the end, after I had thoroughly investigated the matter, I reached an unexpected conclusion: it would actually take more faith to maintain my atheism than to become a follower of Jesus.

The other religions of the world are about ritual and ultimately about self, about you proving yourself worthy; Christianity is about grace.  Forget earning it yourself; you're not good enough on your best day.  You are saved by grace.  No other religion teaches grace.  Islam teaches that Allah is unknowable.  Christianity teaches that not only is God knowable, he wants us to know him.  Islam doesn't teach salvation, it teaches servitude to a fickle, arbitrary, distant Allah.  Christianity teaches forgiveness by Grace; that you're given a gift by a God who so wants a close personal relationship with us that he gives us a gift we could never possibly deserve.  I like the way the Message translation does this verse (Ephesians 2: 8) explaining the nature of grace:

Evolution vs. creation? I believe people pay way too much attention to this.  There's no mention of evolution in the bible, but there's no mention of the laws of thermodynamics, Avogadro's number, or relativity.  The bible isn't a science book.  Look at it this way: the creation story, how we got here, takes up a page.  The next thousand pages (or more, depending on font size, paper size, and so on) are concerned with how we treat each other while we're here.  Creation is clearly not the emphasis of the book, it just starts out that way.  And saying a fluctuation in the quantum vacuum foam exploded sounds remarkably like nothing springing into something.  If you were trying to explain the standard model of cosmology to people who hadn't developed Algebra, let alone the Calculus yet,  "Let there be light" sounds like as good a picture as I can think of.  Lets see you explain partial differential equations to kindergartners.

As I always say, enjoy your day.  Enjoy your families.  Hold close the ones you love.