Actually, over $410k.  H/T to the Washington Free Beacon, we find that the National Science Foundation has spent more than $412,000 on a study that published scientific results on the “relationship between gender and glaciers.”


The paper “Glaciers, gender, and science,” published in January 2016, concluded that “ice is not just ice,” urging scientists to take a “feminist political ecology and feminist postcolonial” approach when they study melting ice caps and climate change.

“Glaciers are key icons of climate change and global environmental change,” the paper by Mark Carey, a professor at the University of Oregon, explained. “However, the relationships among gender, science, and glaciers–particularly related to epistemological questions about the production of glaciological knowledge – remain understudied.”

I suspect that, like me, you're looking to see if it's April 1st.  I mean, I didn't think the concept of gender even remotely applied to hunks of ice.  Nope.  It's not March 8th and this is a real paper, although it really sounds like it could have been created by one of those random word salad generators, programmed for the indecipherable prose of grievance studies or social justice warrior diatribe.  First noted by Reason Magazine,  which quotes the author of the paper saying:


"What I'm trying to do in my research is provide more of a human story about how shrinking glaciers, warming temperatures, changing precipitation, how that plays out for different people," said lead author Mark Carey, an associate dean of Oregon's history department, in a interview accompanying the press release.

I'm sure Carey is well-intentioned, but if his goal was to put a human face on climate change, he failed. The paper is simply impossible to read with a straight face. It employs liberal buzzwords—colonialism, marginalization, masculinist discourses, etc.—with such frequency that the entire thing comes off like a joke. Just try to follow along with this paragraph:


Feminist and postcolonial theories enrich and complement each other by showing how gender and colonialism are co-constituted, as well as how both women and indigenous peoples have been marginalized historically (Schnabel, 2014). Feminist glaciology builds from feminist postcolonial science studies, analyzing not only gender dynamics and situated knowledges, but also alternative knowledges and folk glaciologies that are generally marginalized through colonialism, imperialism, inequality, unequal power relations, patriarchy, and the domination of Western science (Harding, 2009).

In the WFB article Carey is further quoted as saying he hired a new graduate student, Jaclyn Rushing, an environmental studies and romance languages major, and became interested in  "the relationship between women and ice"; thus turning the "lens of feminist studies" to the study of, well, massive hunks of ice.

Let me pause for a moment to swear I am still not making this up.


One purpose of “feminist glaciology” is to “analyze how power, domination, colonialism, and control—undergirded by and coincident with masculinist ideologies—have shaped glacier-related sciences and knowledges over time.”

“Most existing glaciological research–and hence discourse and discussions about cryospheric change–stems from information produced by men, about men, with manly characteristics, and within masculinist discourses,” the paper said.

When studying the gender aspects of ice, one cannot leave out the patriarchy, the paper adds.

I'm not often too confused by a paper to comment, but the main question I have is whether it's permissible to sacrifice trans-gendered pseudo-virgins to the glacier gods to keep the glaciers at bay? 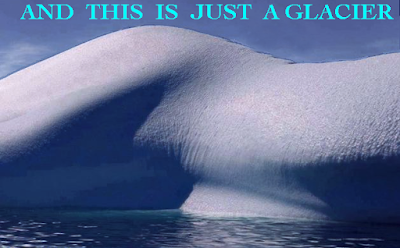