Nice Day for a 'Cue

Beautiful day today!  Mid 50s at daybreak turning to mid-70s for the high.  If I had thought to get prepared last night, I'd have smoked a pork butt or something involved like that.  Instead, I figured I'd make a fatty in the afternoon (those only take 2 or 2 1/2 hours in the smoker).  And then I got waylaid by doing taxes and forgot to get started in time.

Atomic Buffalo Turds to the rescue!

Atomic what?  Another of the recipes that are mainstays for the barbecue crowd, ABTs, like fatties, are a template, not a recipe.  A quick search with your favorite search engine will get you a bazillion recipes.  Here's what I did.

I started out with a pound package of pork sausage and eight fresh jalapeno peppers.  Cut the peppers in half lengthwise, and clean out the web and seeds so they can be stuffed.  Most recipes put a layer of cream cheese, or a cream cheese mix in each half, and then use a prefab sausage like a Lit'l Smokie or another small sausage.  I left out the cream cheese and used the raw Jimmy Dean Pork Sausage.  Rolled it up into a small cigar shape (some would say turd shape...) that fit in the pepper and just laid it there.  Covered it with grated sharp cheddar, then wrapped it in a slice of bacon.  Had a little sausage left over, so I rolled it the same way, rolled it in cheddar, wrapped in bacon and threw it on this rack, too.  Sort of a one-ounce mini-fatty.

Into the smoker at 230 for an hour and a half, followed by the oven at 375 for no more than another half hour, and out they came: 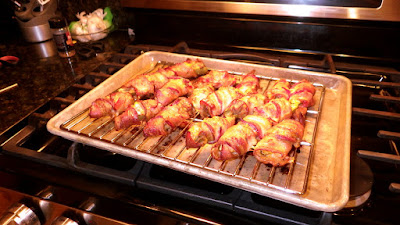 Meat, veggie, dairy, and bacon in one place.  They're an appetizer or a dinner.  An ideal diet food, if you're doing LCHF, or "paleo".  It doesn't get much better than this.