Raging Against the Wrong Machine

I have to admit to not having the stomach to watch the DNC coverage - much as I didn't watch the RNC coverage.  In the case of the Evil party this week, I just had my gall bladder taken out; my system just isn't used to that much bile.  Besides, as I've said many times, I hate day to day politics.  Paying attention to politicians is like cleaning the cat box.   It's a disgusting, revolting task that exposes you to all sorts of dirty, filthy things you'd rather never see, but if you don't do it, the job just gets even more disgusting and revolting.

I have seen or heard bits and pieces; I've heard the crowd in the convention chanting "Lock Her Up" about the Hildebeest, which was the chant heard during the RNC that instantly and automagically became hate speech.  I've seen the idealistic communist Bernie supporters, and I'm going to rant against them for a minute.

There's a quote attributed to Friedrich Hayek that goes, "if socialists understood economics, they wouldn't be socialists", and it's obvious how right he was when you read what those kids are saying.  They show complete ignorance of what they really want and what socialism really means.  Take these two signs:  “End Capitalism Before It Ends Us (And the Planet),” and “Human Needs Over Corporate Greed.” These are dirt-common democratic beliefs; homilies for the spiritual brothers if you will.  To quote from The Scandal of Money.


Most Democrats see robotics and other advancing computer technologies as job killers rather than job creators, as if more workers would be employed if they were less productive. They see energy production as chiefly a source of pollution, to be suppressed by the Environmental Protection Agency (EPA). They are transforming the Internet into a sterile and litigious public utility regulated by the Federal Communications Commission. They are making the banks into a protectorate of the Federal Reserve Board, which they are turning into a fourth branch of government. All these Democratic extensions of government thwart entrepreneurial job creation. They are the chief threats to the middle-class family’s economic well-being.

In the case of the first slogan, it has been shown time and again, that when a company makes more of something, it costs less: 20 to 30% less for every doubling of quantity sold.  Pay attention Bernie lovers: that means the more they make, the more efficient they are, which means less waste and less harm.  In the second, case, capitalism isn't about greed, it's about filling people's needs.  If a company doesn't fill their customers' needs, they go out of business regardless of how greedy the owner is or isn't.  Furthermore, no system in history has lifted more people out of poverty than free markets have.  Free market principles have lifted almost 3/4 billion people out of extreme poverty in China alone, since the introduction of market reforms in the early 1980s.


Between 1981 and 2010 it lifted a stunning 680m people out poverty—more than the entire current population of Latin America. This cut its poverty rate from 84% in 1980 to about 10% now. China alone accounts for around three quarters of the world’s total decline in extreme poverty over the past 30 years.

The situation has improved so much since free market reforms in India that they have the same upward mobility as Americans do.  Comparing the year intervals of 2004-05 and 2009-10, about 40% of poor households moved above the poverty line between the intervals. Similarly about 11% of poor and vulnerable moved into the middle class during the same period.

The kids don't know what they're protesting nor do they understand what they want to replace it with.  Take this quote from a protester named Michaela Bennett:


Bennett, who was a history major, noted that in countries such as Russia and China it hadn’t worked “when they’re tried to implement communist or socialist policies.”

This is the classic argument!  It has never worked before, they killed over 100 million of their own citizens, it has always ended in misery and suffering, but This Time It Will Be Different because they just didn't have the Right People in charge.  No thought to the fact that those previous times, those people thought they had the Right People in charge.  One wonders just how there could be advocates for such a system in 2016, despite well over a hundred years of experience with it. They misunderstand the system completely!  It's not going to work no matter who's in charge.  The same person, asked if her beliefs were socialist, says


“The idea of the community working together and supporting each other, that idea I do support,” Bennett, who lives in Bend, Oregon, remarked. “So if that’s socialism, I guess so.”

No.  No, it's not.  Not the way you put it.  What you describe is being a community and being a good neighbor.  At the most, it's contributing to local charities.  Socialism is when you get the government to train guns on everyone, take their money and use it to help communities they're not part of.

When they rage against the "top 1/10 of 1%", they've got it all backwards.  They're raging against the wrong machine.  They're raging against people who are generally not doing anything illegal.  Sure, they're beneficiaries of a rigged system and a few probably helped set it up, but not all of them.  Why not try to fix the system so that it really can't benefit one segment of society, if the goal is really to "end injustice".  If they don't want to fix the system, their argument comes down to, "let me benefit from corruption".   The bad system is our phony money from the central banks.  If we had real money and not the central banks' imaginary numbers, there would be nothing to take advantage of.

When they talk about money as being wealth, they have it backwards.  Dollars aren't wealth, they're only a yardstick to measure wealth by.  By analogy, a clock measures time, but it isn't time itself.  And wealth can't be created by creating more dollars any more than you can create more time by painting more numbers on your clock.  It's a good analogy because if you repainted your clock to 36 hours, you'd decrease the "worth" of each hour - from 1/24th of a day down to 1/36th of a day but a day would still be a day just as the value of each dollar goes down in proportion to the number they create.  You'd have more hours but the same amount of time just as every time the Fed creates more money, you have more dollars but the same amount of wealth (if any) thanks to the fetid central banks.

So when they rage about the top 1/10 of 1% having gained so many more dollars, it's meaningless.  The real effect of the central banks is that everyone has more dollars compared to 10 or 20 years ago, but the buying power of those dollars has been diluted by the numbers of dollars they've created.  Adjusted for inflation, using numbers more like measured data in The Chapwood Index or the 1980s method used at Shadowstats than official CPI numbers, the majority of people haven't had an increase in buying power since all power was given to the central banks and the "gold window" closed in 1971, destroying real money.  The only things that allow most of us to survive are the improvements technology has brought us (including farming technologies) and the work of wealth creation, such as the price decrease that comes with every doubling of quantities manufactured.  The incredible price decreases in electronics have increased the standard of living for billions of people.  Did you know that the cost of lighting an area; your home or whatever, has decreased one hundred-thousandfold if you go back to the middle ages?  That's in terms of the hours of labor per lumen-hour of light.  (See Gilder, The Scandal of Money, Kindle location 445)  Stretched out over long periods of time, that's the improvement that markets and technology have given us. It's the main reason anyone feels like we're not sliding backwards in buying power.  As we slide backwards in buying power.

But Bernie supporters will probably never argue to get rid of the Fed and restore real money.  The Fed, while technically not a government agency, is Big Government personified.  It's complete central control on a par with the old Soviet Politburo.  Bernie supporters seem to long for an all-protective Big Brother (to borrow a phrase) to provide for them, rather than to face the world.  Although some of them might go with BitCoin over the Fed if we didn't tell them it wasn't government controlled... 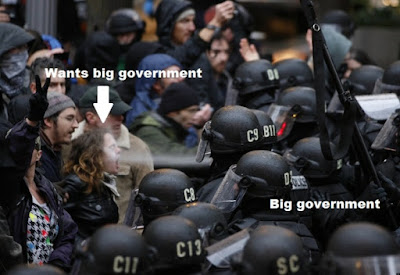 Bernie supporters, if your argument is "let me benefit from corruption" instead of fixing the system, you're part of the problem.  If you want a surrogate parent, who really doesn't care the slightest bit about your best interest and will crush you with the slightest wrong move, push for a bigger government.  Go ahead and get that pepper spray in your face.  If you really want justice, try getting on board with the moves to get rid of central control of money, so that it's fair again.  Real money depends on justice above all else.  Your enemy isn't the "richest 1%", it's the Federal Reserve Bank.