As Promised - An Engine

As promised last week, a running little steam engine.  As I said, the plans and a kit of stock came from Little Machine Shop (LMS). They sell a 2 DVD set of instructions and demos of how to make the engine made by company called SwarfRat . Don't recall if I got the plans from SwarfRat or LMS, but I think it was from SwarfRat.  Since this is pretty much a beginner machining project, if you're buying the LMS kit, you will probably benefit from the DVDs.

This is my first little engine, and a fun project.  Although I used the CNC mill, it was almost exclusively used as a drill press with accurate readouts for where (in X and Y) and how deep to drill.  Aside from that, the mill was just used to square the two pieces of plate to size.  LMS says the engine can be made with a lathe the size of a Sherline and a drill press; I think that's right.  The majority of the project was lathe work, turning the flywheel and smaller, but more fiddly crank wheel (you literally cut away something like 80% of the aluminum you start with).  The cylinder is machined on the lathe with the four jaw chuck because of the square shape (doesn't go well with a three jaw chuck) and the need to drill and size the cylinder about 1/8" off center of the 1" square block it's made from, and then the cylinder is reamed to a final diameter.  In this case 0.499"  - here's my 0.499 reamer as the cut is starting. 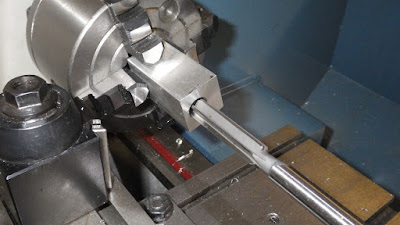 After reaming the cylinder, the chuck is put back to centered, the four-sided cylinder cut to final length, drilled for a single intake and exhaust hole into the cylinder and another hole drilled and tapped one for a long, spring loaded screw that holds it to the upright part of the support.  Finally, the four jaw is replaced with the conventional three-jaw and the piston cut to fit the cylinder.

Naturally, I did some things wrong and made some mistakes.  I've always said that life, much like working in the shop, is all about recovering gracefully from screwups.  The graceful recovery I get the biggest chortle from concerned a very minor part: a little steel pin: 0.142" diameter that's supposed to be threaded to 6-32 for 0.350" and then cut to be only 0.600" long.  I had only one die for 6-32, in a cheap Hazard Fraught tap and die set, and it simply wouldn't cut the steel.  In an effort to help it out, I trimmed back the pin from.142 to .134, which is probably too small in diameter to thread properly.  The die still wouldn't cut this soft, steel pin and just roughened the end.  In a final test, I turned back a little scrap of 1/4" diameter aluminum to .140 and tried cutting it with the die.  I could feel it cutting, but when I went to unscrew the die, all I found was the end of the aluminum pin sort of gnawed off with a large step in diameter.

So I had to order a die.  I discovered these dies - with a built in die wrench (the eBay seller - no relation, etc.).  When it got in, I thought that I had messed up the pin too badly.  So where do I get a .140 pin or "rod" of it to cut?  At some point while pondering, one of the voices in my head said, "why not a nail?"  I didn't even know if I could thread a nail, but after a quick test showed that it would cut, I cut off the head and chucked up a few inch long piece of nail from my junk collection.  It was .160 diameter, so I turned it to the right size and threaded the nail.  The new die worked perfectly. 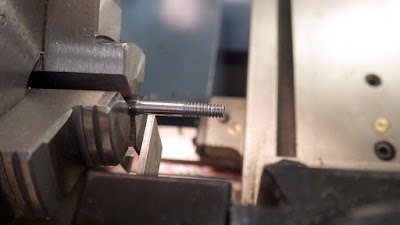 This is just as I was preparing to cut it to length with the cutoff tool on the lathe.  The pin is in the engine as you see it.

There are more stories from making it, but probably not worth getting into.  While it's "done", I'll probably work on this a bit more.  It has had very little finish work done to it.  I'd like the look of a polished aluminum version, but that means taking it completely apart and lots of sanding time.  Still, it might be worth it.

I've had it completely built since Friday, but was unable to test it because I didn't have a way to get compressed air from my compressor to the engine.  The last couple of days were spent coming up with ways to do that and rounding up parts around town.