In the private Space Race, don't overlook Blue Origin, Jeff Bezos' company.  Ars Technica tells us of a successful test of their BE-4 engine which has gathered lots of attention in the industry - although it was a short, three second test and only running at 50% power.


New space company Blue Origin has spent the better part of this decade developing a powerful rocket engine for use in its orbital rocket, New Glenn, and potentially other US-based launchers. This engine, the liquid natural gas-powered BE-4, has been closely watched both within the aerospace industry and in military space because it uses innovative new technology, has largely been developed with private funding, and is fully reusable.

However, while there was great promise with the new engine, it still had to perform. And so the aerospace community has been watching development of the engine to see if it could pass a key hurdle—a hot-fire test. After months of waiting, that's what finally happened on Wednesday at the company's facility in West Texas when the BE-4 engine fired at 50-percent power for three seconds.

When you read that it was a 50% power test, that's still a lot of power with this engine.   The BE-4 engine is rated at 550,000 pounds of thrust making it the most powerful rocket engine developed in the US since Rocketdyne built the RS-68 engine two decades ago.  Half power for the BE-4 was 275,000 pounds of thrust, 45% more than the SpaceX Merlin engine at full power (190,000 lbs. of thrust) . 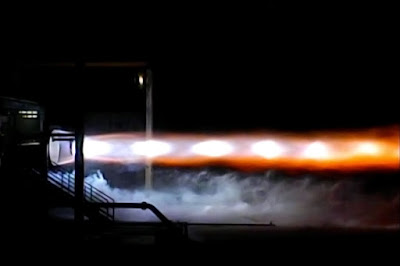 (supersonic flow patterns, called Mach Diamonds, in the exhaust stream of the BE-4 - Blue Origin photo)

Did you notice that they state the engine has largely been paid for by "private funding"?  Rumor has it funding was from pocket change found between the cushions in Jeff Bezos sofa.  I know it's a rumor out there because I made it up and emailed it to people, but Ars elaborates on the real story.


The company's success is all the more significant because it was largely funded by Jeff Bezos, without direct cost to taxpayers. Up until a few years ago, every US-based rocket engine was funded almost entirely through government contracts, such as the Saturn V's F-1 and the space shuttle's main engines. SpaceX changed the model by building its Merlin rocket engine (190,000 lbf) largely on its own, and then using nine of them to power the Falcon 9 rocket.

Blue Origin is talking about putting seven of these engines - almost 4 million pounds of thrust - on its New Glenn rocket, a massive 82-meter-tall (270 feet tall ) rocket with the capacity to lift 45 tons to low Earth orbit and an impressive 13 tons to geostationary transfer orbit.  It will also be reusable—up to 100 times—according to Bezos. Blue Origin is attempting to position the New Glenn rocket as a centerpiece of a human return to the Moon and is working toward first launch of this rocket by 2020. 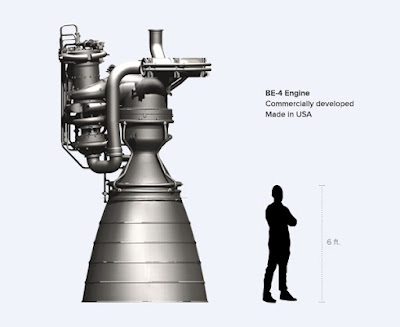