What Did You Get at the Hamfest, SiG?

Funny you should ask.  I bought only one thing, a book on vacuum tube circuit design. 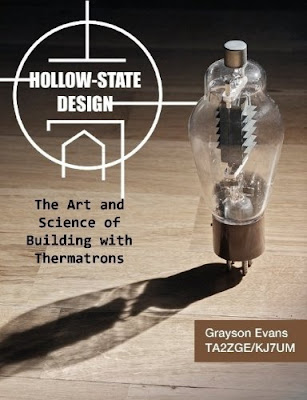 The author himself was there at the hamfest, selling copies for $20, considerably less than what Amazon is asking.

When I first got interested in electronics as a hobby, vacuum tubes were the mainstay of everyday electronics.  I started out testing tubes at the local drugstore to see if it would fix the family TV, as have tens of thousands of others in my generation.  Transistor radios were common, but so were millions of vacuum tube radios - some version or other of the All American Five - that took 20 seconds to warm up and start playing.  I've worked on vacuum tube circuits, troubleshot and fixed tube radios as a hobbyist.  I still have a couple of vacuum tube radios in the ham shack.  They haven't been turned on in a while.

By the time I started working in engineering, vacuum tubes were used only in a few applications where there was no alternative - mostly high power transmitters.  I started out designing in a mix of discrete transistors with a few integrated circuits and over the years, design shifted as semiconductor makers continued to put more and better integrated functions into a single package.  We could replace complex multi-transistor circuits with a single integrated circuit, often in the same area as one of the transistors we replaced.  This did good things for both manufacturers and our customers: more circuit sophistication brought better performance and getting that sophistication with fewer parts brought more reliability and lower prices.  I'm not quite sure when I last designed a discrete transistor circuit into something, but it was probably over 15 years ago.  After that, the only reason to design in one or two transistors would have been to band-aid a circuit already in production or to design a piece of custom test equipment.

So why the book?  Now that retirement brings some more time (Hah!) I want to look into some aspects of vacuum tube design.  The audio market for vacuum tubes is alive, vibrant, and getting big premiums over transistor amplifiers.  I have no desire to pay those premiums but would like to hear one side by side with the solid state amp I use.  Perhaps designing and building a vacuum tube-based guitar amplifier would be right up my alley.