Keep An Eye on the Sky

The Chinese Tiangong-1 ("Heavenly Palace") Space Station is going to reenter the atmosphere sometime between tomorrow night and Monday morning (here on the east coast).  The best current predictions from Aerospace Corporation are saying

For references, minus 14 hours is 0115 UTC, or Saturday night at 9:15PM EDT, midpoint is 5:15 PM EDT Sunday and the plus 14 hours time is Monday morning at 7:15 EDT.  And, no, stating the time to the minute when the uncertainty is 14 hours doesn't make sense to me.  With 28 hours of uncertainty, it should be plain to everyone that the buzz earlier in the month about the debris landing in Michigan was impossibly precise, and apparently just an attempt to gather some headlines.  It won't be possible to predict where the debris lands until it's known when the orbit breaks down.  I'll guess they won't know where the debris will be come down until about 30 minutes before impact.

That Aerospace Corporation webpage includes a video explaining the re-entry and breakup process of the 34 x 11' space station, commonly said to be the size of a "school bus" (as if they're all a standard size everywhere in the world).  As atmospheric drag picks up, I'd expect the solar panels to rip off first, which they depict.  After that, it's anybody's guess how much burns up and how much makes it to the surface, but some will.   It should go without saying that with a total of 374 square feet of profile, some small amount of that which will make it through the atmosphere and that could hit anywhere on the 197 million square miles of the earth, including the ocean, anyone's chances of getting hit are infinitesimally small.  The odds make hitting the Powerball look like a sure thing. 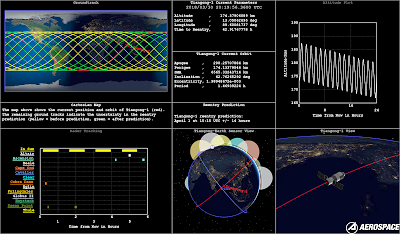 Posted by SiGraybeard at 7:49 PM