So I Had A Little Run-in With eBay...

It was a while ago, but I think I'll tell the story now because it goes with the current pogrom going on with YouTube and the other so-called progressive tech sites.

It starts out with my DPMS LR-308B, an AR-10 clone/knockoff, which I've had since early 2010.  I know I've posted about some of my experiences on occasion over the years.  I was never really happy with the ergonomics of the rifle; it came with a standard A2-style fixed stock and it was never quite right.  Here's the DPMS website's photo.

Before I ran across the sale on The Precious, I was considering taking the LR-308 out as my long-range, precision rifle, so I spent some more time with it about a year ago.  The ergonomics of the stock became apparent and I decided to do something about that.  Then my focus shifted to the Ruger and fixing this issue went to the back of my mind.

Last November, with good sales on AR parts (and complete rifles) going on at a blistering pace, I found a sale on a Magpul MOE adjustable stock and with some help from them, figured out all the parts I needed to get to swap out stocks.  A video from DPMS helped. 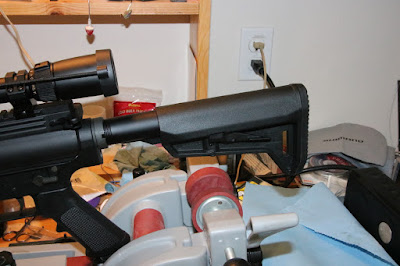 My cluttered workbench with the new stock in place.

After a few weeks of occasionally thinking, "what do I do with this old stock?", I decided to check eBay.  There were a bunch of A2 stocks on there, as there are tonight, so I assumed it was OK to put it up there for auction; I put up the listing on January 21st.  The next morning, I had an email from eBay with the ominous wording:

Your eBay listing has been removed: Assault Weapons Parts and Accessories

The email went on:


Some of your listings haven’t followed our Assault Weapons Parts and Accessories policy. In this email, we're including some policy information to help you with your future listings. We also had to take the following actions:
- Listings that didn't follow eBay guidelines have been removed. A list of removed item(s) is available further down in this email.
- We have credited all associated fees except for the final value fee for your listing(s).

Due to numerous laws and regulations regarding the sale of assault weapons (including parts and accessories for assault weapons), these items aren't allowed on eBay.

You may list accessories that would fit a variety of different weapons, such as scopes and sites. However, if you sell these items, you can't mention assault weapons in your listing.

There was a convoluted process for appeal, and I tried, but those people are put there to keep you from getting what you want.  When I complained that there were several of those stocks on their site right at that minute, the 'droid gave me an ominous, "we'll get them, too".  I let it drop.

Although I'm not sure and the text of the listing is long since deleted, I think my faux pas was to say I took it off my LR-308, and the last paragraph specifically says "you can't mention assault weapons in your listing."  I took a look at one such listing for an A2 stock tonight, and that page says:


Fits a wide variety of non assault makes & models.  When in doubt please use "ask a question" button to find out if this will fit your gun.

If I had been a bit more of a weasel, I bet they wouldn't have kicked the listing off the site.  I've been telling myself that I should open a gun broker account, though.  This is a bit of an incentive.

The lesson here for surviving YouTube in the future might be to never honestly say what the videos are about in the title and maybe not even the description.  Maybe refer to an AR-15 as an Armalite-inspired small diameter and an AR-10 as a large diameter?  That hurts the ability to search for them, so maybe not.