The Fed is Data Driven

The Federal Reserve has said many times that their decisions are "data driven" and they don't just implement policies without regard to how the economy is actually performing.  Of course, they have to say that.  It's not like they could say, “We’ve already proven we don’t know any more of what's going on than you do. The biggest financial disaster of the century, the housing bubble, hit us like it hit you – as a total freaking surprise.”

As a confirmed skeptic, a natural question might be “'is the data that's driving you any good?”  You're not going to reach correct decisions of the data is garbage, right?  Fundamentally, Garbage In Garbage Out.  It turns out, it's hard to answer.

Right now, there's a general optimism about the economy that we haven't seen in years.  It's widely being reported that consumers are getting more money in their paychecks so that they have some money that they didn't have before and they're opening their wallets.  There's talk that new unemployment claims are at their lowest levels since 1969, and that we're at full employment.  At the same time, there's some belief that the economy is reaching maximum potential Gross Domestic Product (GDP).  Are these reasonable?

How do we even define full employment?  The Labor Force Participation Rate hasn't visibly improved since about 2014, when we routinely remarked that while Obama's administration continually plugged their improving unemployment number, the labor participation rate was as bad as it was in 1978; as bad as back in the the Jimmy Carter days.  You'll note the right end of this plot, from 2014 to now, is flat - unchanged. 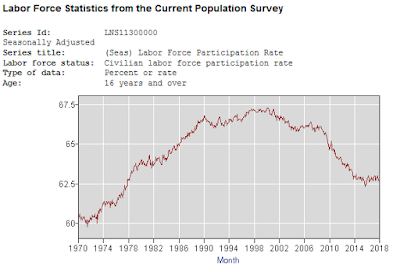 Have that many people left the labor force permanently?  It was always explained those were people who had "quit looking" for work. Are we suddenly saying that roughly 3 to 5% of the adults in the country, people who were working in the '90s and up until 2008, retired or went on some form of assistance?  John Mauldin points out


In any given month, we have only a rough approximation of how many people are unemployed and an even rougher idea of how many might become employed but are currently not even looking.


Recent events have exposed a hole in the middle of economists’ knowledge of key economic parameters: We know neither the unemployment rate at full employment nor the potential level of gross domestic product (GDP).

That hole is particularly important right now. The combination of the deficit-financed tax cut and the new spending bill are pumping hundreds of billions into an economy that many argue is already at full employment. If so, then much of this extra spending won’t lead to new investment, jobs or higher real pay. When the economy’s human and capital resources are fully utilized (meaning actual GDP is equal to potential GDP), fiscal stimulus just generates inflation and higher interest rates. Even if the extra demand might create some wage pressure, it will be met with higher inflation, so real wages – the paycheck’s actual buying power – won’t change at all.

The problem is that those making that argument are implicitly asserting that they know that the “natural rate of unemployment” – the lowest rate consistent with stable inflation – is roughly equal to the current unemployment rate. That is, they believe we’re at full employment. But the truth is they have no way of knowing that, and one key indicator – inflation – suggests they may be wrong.

Notice that this is in the WaPo?  Chances are Jared Bernstein and I aren't likely to agree on what economic policies we should follow – but we can’t even have that conversation until we can agree on what the data says and means.  And we can’t.

It's even more unsettling once you start thinking about it. Economists are reaching conclusions and policymakers are making decisions based on derivatives of invisible derivatives.

If we were truly at full employment, we would expect wages to be getting pushed up by supply and demand; indeed fear of rising wages has seemed to immobilize the Federal Reserve for years (if not decades).  But wages haven't been increasing for most workers, they've been declining, as Real Investment Advice graphs here. 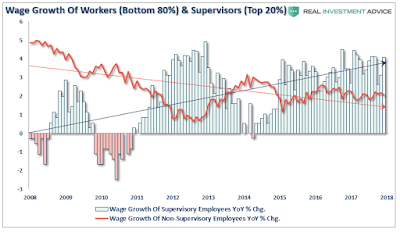 It shows the bottom 80% of workers' pay has been in decline since 2008 while supervisory pay, the top 20% of workers, has been on the rise.   Neither of those trends has appeared to change in the year since the Trumpening, but real competition for the lower 80% of workers would raise their pay.

The guys at 720 Global do some regression analysis (pdf warning) to say that wages are not changing in accordance with the claimed unemployment rates.  They argue that unemployment is closer to 9% than the widely cited 4%.

If you think that's messy, don't even start on GDP.  GDP isn't an easily determined number and yet it's treated as if it's handed down by God himself rather than a "concatenation of approximations".  A useful comparison to GDP measures is that it's less like your GPS telling you "turn right in 250 yards" and more like "it's somewhere north of here".  Here’s Jared Bernstein again:


It’s true that influential institutions such as the Federal Reserve and the Congressional Budget Office (CBO) believe that the “natural” unemployment rate is above the current one, meaning our labor force is beyond fully employed. Their estimates are 4.6 percent and 4.7 percent, respectively, while the actual rate is 4.1 percent. The CBO also asserts that our current level of GDP – $19.7 trillion – represents full capacity.

But the evidence undermines much confidence in these authoritative-sounding point estimates. First, understand that neither of these measures – the natural rate or potential GDP – can be observed. They must be estimated based on the movements of other variables. For example, the key relationship underlying the natural rate is the one between unemployment and inflation, with the basic insight being that once economic capacity is exhausted, any more demand just shows up as more inflation (note the link between the debate over fiscal spending right now).

Economics is frequently called the Dismal Science.  I think the word "science" is too flattering for the field.  There's simply not enough hard, trustworthy information in use.  Here, I'm going to hand off to John Mauldin for a well-worded conclusion:


All this is very obvious to people who lack graduate degrees, yet for some reason the economics profession persists in thinking it knows things it simply does not. Economists have physics envy. They want their profession to be a hard science, when it is probably one of the softer of the soft sciences.

Believing that the data they have is precisely meaningful gives people like Federal Reserve governors the mistaken impression that they have what they need to manage the economy successfully. They don’t. They have lots of data and not so much information.

Hence, to my great surprise, I find myself 100% agreeing with Jared Bernstein’s conclusion:


Our best move is thus to admit the uncertainty, toss the point estimates, and follow the data, particularly inflation. Recognize that we’re driving a car with no reliable indicators of engine overheating, so we’ve got to use our eyes and ears to gauge the heat. That doesn’t call for recklessly pumping the gas or the brakes. It does call for more humility about the limits of our knowledge.

...
Think about this: 12 people sit around a table, chew the fat over masses of data and metadata, and then set the price for the most important commodity in the world: the US dollar, the world’s reserve currency. How do they know they’re right? Well, they tell us confidently, it’s all in the data.

How do they know they're right?  They don't.  They just think they do.  Doesn't that inspire confidence in central banks and central planning?