The Sublime and the Ridiculous

"Life", friends and I used to say in about 1980; when we were late twenty-somethings full of ourselves approaching the peaks of our lives, "is a game that should be called 'Gems and Turds'; Every day we reach into the bag and see what we pull out".

The news today is gems and turds.  On one hand we have the simply horrific, disgusting speech the Hildebeest made - in a foreign country no less - depicting everyone who didn't vote for her as the most vile, despicable, racist, misogynistic, disgusting people she could imagine.  She has gone so far beyond calling us deplorable she can't see it in the rear view mirror.  So I will give the decrepit old hag and her speech every bit of recognition they deserve and not waste another pixel on them.

The gem, though is the life of Stephen Hawking, who passed away this morning on a doubly significant day.  First, today is Albert Einstein's birthday, and nobody in the current generation of scientists has been compared to Einstein as much as Hawking was.  Secondly, it's pi day: 3.14.  There's hardly a symbol more recognizable as math to the general population.

When Stephen was diagnosed with ALS - amyotrophic lateral sclerosis or Lou Gehrig's disease - in 1963, he was given a few years to live.  I don't think anyone would have him expected to live another 55 years to 76.  His biography is worthy of a good story.  He married, had children, divorced, remarried, and divorced again, all the while sliding further into his isolation from the rest of world.

Yes, I read his most famous book, "A Brief History of Time" along with most of the rest of the planet, but his book was so successful that it had an unexpected side effect: it made him wealthy enough to be sure he'd be able to provide for his children after his disease took him.

His fame and life story earned him guest spots on Star Trek The Next Generation, The Big Bang Theory and The Simpsons.  He celebrated his 60th birthday by taking a ride in a hot-air balloon. The same week, he also crashed his electric-powered wheelchair while speeding around a corner in Cambridge, breaking his leg.  Five years later, he took a ride with Go Zero G, riding in a specially modified Boeing 727 that flies a roller coaster course allowing short periods of weightlessness.  It was a prelude to a hoped-for trip to space with Richard Branson’s Virgin Galactic company aboard SpaceShipTwo.  He said he does these things partly as a message: “I want to show that people need not be limited by physical handicaps as long as they are not disabled in spirit.”

A fairly well done obituary is in the NY Times. 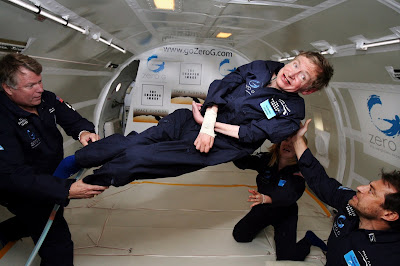 In his later years, Hawking became more anti-faith, changing from talking about “knowing the mind of God” to “It is not necessary to invoke God to light the ... ”, firecracker of the Big Bang.

Rest well, Dr. Hawking.  For your sake, I truly hope you're right in your beliefs that “I regard the brain as a computer which will stop working when its components fail. There is no heaven or afterlife for broken-down computers; that is a fairy story for people afraid of the dark.”  I think Blaise Pascal would have liked to talk with you about that.