Last Thursday (or Friday?) I was doing my usual wading through junk mail.  Lots of it is easy to delete this time of year. In the mail, was the daily link to PJMedia, where I saw a story called, “Cops Should Do a Wellness Check on Woman in Peloton Christmas Ad” by Stephen Kruiser, who ordinarily writes things a bit tongue in cheek.  That demanded a read.

It turns out it's a bigger story than I knew.  I don't know when the Peloton ad first appeared but it fired immediate outrage by the easily offended and made headlines far and wide.  For your convenience, I'll embed the ad here.


Kruiser went over the top with his take on it - but not as much as the wokescolds.


Her Eyes Are Blinking "H-E-L-P" in Morse Code
...
A quick respite from the political news slog has been delivered unto us from the most unlikely of places. Peloton -- the indoor workout bike that runs around fourteen and a half million dollars -- has released a Christmas with a creep factor so high that it has people reaching across the aisle in agreement about its awfulness.

Before sharing some words from another article he read:


Allahpundit shared his thoughts about the ad at Hot Air:


The weird part is the … eagerness with which she shows her gratitude. It’s lovely to be grateful for an expensive gift, but she’s *really* grateful and *really, really* wants her husband to know it. It’s not just that she feels compelled to record herself using the bike repeatedly over a span of many months. She looks curiously anxious doing it, even when smiling into the camera. At the end of the clip, when she finally shows him the footage, her eyes are trained on his reaction, seemingly desperate for his approval.

Is everything okay between these two?

I honestly don't see a thing wrong with the ad.  For those that don't know the details, a Peloton stationary bike is an excruciatingly high end stationary bike - almost as much as an actual, fairly high-end road bike.  I looked into Peloton once; the bikes start at $2200 and require subscription to those cycling workouts they always show in the commercials.  I think I got to $3500 before I stopped looking.  As an aside, I've been riding off and on since I was 30.  I've never once been in that position they always show of the rider sitting upright with both arms straight out to the sides. (and BTW, if you have a real bike there are several apps and websites that let you do some of what Peloton does for a few bucks.  I hear good things about one called Strava.)

Deep inside, I think we all know that most exercise equipment is a clothes rack within six months -- or six weeks.  I would think it would be considered nice - or an attempt to be nice - to gift your spouse a $3500 toy for Christmas, but that's just me.  They'd probably object to jewelry or a new car, too.

What are people so upset about?   They call it “humiliating and misogynistic.”  They say Peloton husband giving his wife an exercise bike means he thinks she's fat and needs to drop some weight.
“This fictional frightened woman’s yearlong journey to lose the 14 ounces of water weight that her husband the good Doctor Mengele insists she musts is the Christmas miracle that a news-weary world needs.”  “Nothing says "maybe you should lose a few pounds" like gifting your already rail-thin life partner a Peloton”  and “After a year, the Peloton wife looks exactly the same.  So it's an insulting gift and completely useless.” 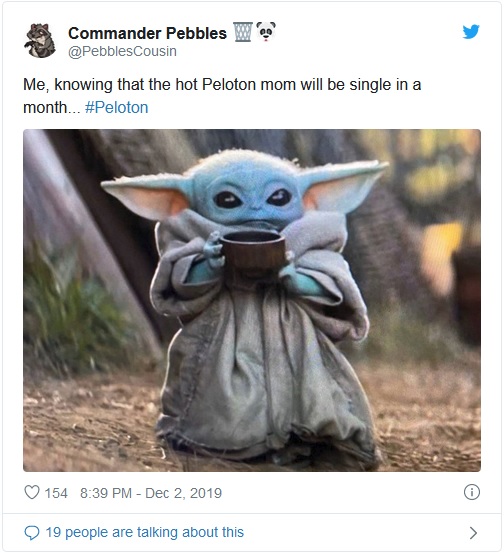 So much misinformation... so much stupidity...  Allahpundit gets it exactly right when he says,


The first reaction everyone has is “Why is this guy buying his gorgeous, rail-thin wife an exercise bike for Christmas? Does he think this goddess is overweight?” No. That’s why they cast the actress they did. They knew that if the wife had as much as an ounce of visible fat on her, the takeaway would have been that Peloton is encouraging dudes to pressure their significant others to drop a few. There would have been sit-ins at Peloton HQ to protest a crime against body-positivity of that magnitude. Only by casting a woman who *obviously* didn’t need to lose weight could the company semi-plausibly say, “He gave her the bike for fun and for cardiovascular fitness and for no other reason.”

Then he goes on down the path to insanity.

Lighten up people, it's a commercial. Christmas is coming. People are looking for gifts, companies are looking for sales. There's no reason for us to think that Pelton Wife didn't say the only thing she wanted for Christmas was a Peloton exercise bike. I know... I know.  It's not possible to please the wokescolds.

A funny postscript is that actor Ryan Reynolds has a small label gin company.  In the week or two this has blown up, Ryan tracked down the actress (Monica Ruiz) to do a parody of the commercial to promote his Aviation Gin brand.  You can watch the commercial, hosted on Twitter, there.