One Out of Three Today

That's one out of three of the launches we expected.  Today was supposed to be dual launch of Falcon 9s from the Cape.  A Starlink launch this morning at 10:21 AM and the SAOCOM-1B satellite this evening at 7:18 PM EDT.  Over in Boca Chica, prototype SN6 was supposed to do a 150m hop today.

When I checked in with SpaceX launches this morning, there was a notice that the weather yesterday interfered with prelaunch operations for the Starlink launch and it has been rescheduled for Tuesday morning, so the morning launch was off.

As the day went by, I opened a tab on LabPadre where I've watched the majority of tests.  There was a mid-afternoon test where they got close to lighting the engine but aborted.  An apparent recycle that didn't involve sending crews to the pad and then nothing, so the hop was off.

Luckily, the SAOCOM-1B launch went off without a hitch and it went as we had hoped for.  (That link is to the SpaceX mission video; here's some info on the SAOCOM-1B mission)  The launch trajectory went south, perhaps 10 degrees east of directly overhead, and then the booster returning to the Cape (Landing Zone 1) also went overhead and we were able to see the ~25 second long "entry burn" about a minute before landing. 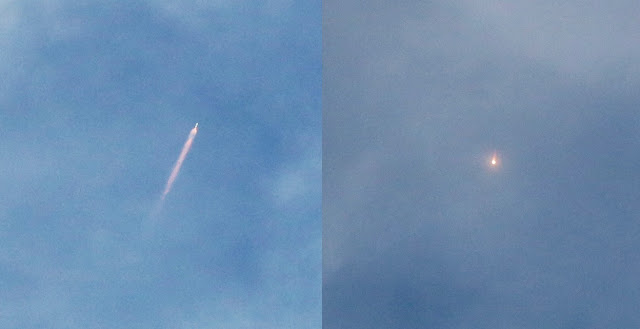 Due to the flight trajectory we got the launch sounds for a very long time, easily a solid six minutes, ending with the window-shaking sonic boom of the booster on return to the Cape.

We had rainy weather all afternoon but the clouds thinned just enough to catch part of the ascent and the last minute or so of the descent.

Maybe 20 years ago, I heard a Space Shuttle launch manager say, "you have to get used to disappointment in this business" and that's still the truth.  We started out hoping to see three launches and consider ourselves lucky to have seen one as well as we did.  Next attempt at hopping SN6 will be tomorrow, 8 AM to 8 PM, CDT.  Next attempt at the Starlink launch will be Tuesday morning.  It's not like a long dry spell.