At the end of Wednesday's column on the SpaceX prototype elevator, I mentioned that on Tuesday they had static fired SN10 but that it apparently did something wrong because one of the three Raptor engines was swapped out Wednesday.  In a tweet, Elon Musk had said one was “suspect” and needed to be swapped out. Bearing in mind that SpaceX is intending these engines to be manufactured and used in numbers unprecedented for any rocket engine and you can understand how they might have a ready inventory and then test all three again.  The engines that were fired yesterday should have zero degradation from running for a couple of seconds, so put in the new one and test all three.

That's what they did yesterday.  The test subjectively looked and sounded better to me, just based on seeing bunches of these static firings


For some reason, I couldn't get this to start at other than time = 0.  If you set the bar to 2:10 you should be less than 10 seconds before ignition.

If you've seen any of the chatter about Elon Musk and the crypto currency called Dogecoin, you might appreciate the joke on the new Raptor waiting to be installed. 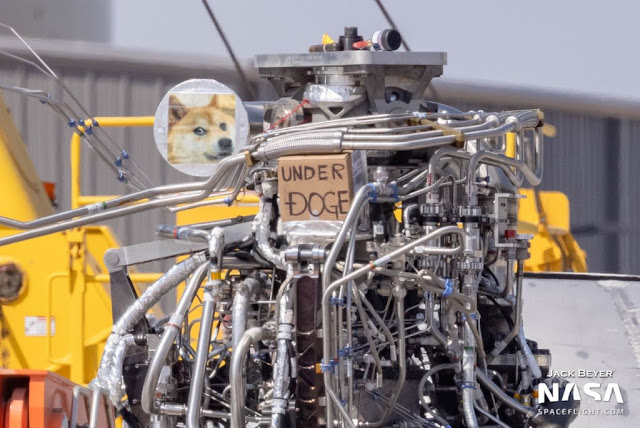 "A Raptor Engine labeled “Under Doge” (serial number unknown) was delivered to the Starship build site in Boca Chica just now, and Raptor SN56 (green nozzle) took its place on the Raptor van, presumably headed back to Hawthorne or Mcgregor.
@NASASpaceflight"  from Twitter user Jack Beyer.


Given how SpaceX turned around SN10 from a questionable static firing to an apparently successful firing within 48 hours, it might catch your attention that the SLS second static firing test (Green Run Test 2) has slipped out to NET Mar 16. (NET = No Earlier Than)  The SLS was test fired in January and aborted at 67 seconds over a "finicky" valve.  The valve was repaired and during further testing, another valve in the same section failed.  Replacing an engine on Starship took less than a day.  Replacing a valve on SLS will take three weeks.

In any comparison like that, Starship is going to look better than SLS.  Starship has been designed to be worked on easily at this phase in its development when SpaceX uses the "test to failure, fix, repeat" mantra.  SLS has not been designed for any of the rapid turnaround features that Starship has.  Even SpaceX’s Falcon 9 rockets, the world-standard for reusable orbital-class boosters, would have a hard time challenging that engine swap turnaround.  My guess is that it would take less than a week to swap engines in the Falcon 9, too.   I think we've seen it before.