Apparently SpaceX Has Not Forgotten How to Build Boosters

For the first time in eight months, since early September, a new Falcon 9 booster has arrived at SpaceX's Kennedy Space Center facility.  Called B1067, it was shipped to their McGregor, TX test facility for an engine test that was carried out in March.  The McGregor facility had been busy testing the core and two Falcon 9 strap-on boosters for an upcoming Falcon Heavy launch, the first since 2019.


In January 2021, some two months after arriving in Texas, the second of at least two new Falcon Heavy side boosters (B1064 and B1065) went vertical at McGregor, quickly wrapped up its static fire test campaign, and arrived at Cape Canaveral by the end of the month. Roughly a week later, Falcon Heavy Flight 4’s center core (B1066) arrived in McGregor and went vertical a few weeks after that. It’s possible that B1066 performed a static fire test that month, but the booster did unequivocally fire up on March 19th.

This is uncharacteristically busy for McGregor.  In light of how successful booster re-use has become, they produced fewer new boosters in 2020 than any year going back to 2013.


In the six months since the last debut of a new booster, SpaceX has launched Falcon 9 19 times. In fact, almost five months into 2021, SpaceX has successfully completed 15 orbital missions without the use of a single new booster – the latest indication of just how fully reusability is now integrated into the company’s operations. 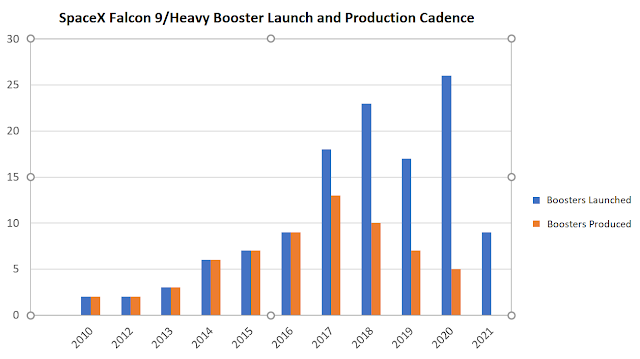 B1067 has been assigned to Cargo Dragon 2's second launch (CRS-22) to the International Space Station as soon as June 3rd.

The title of this post is a little bit of a joke.  The facility in Hawthorne, California that produces the boosters also produces the second stages and the rest of the Falcon 9 hardware.  Since those pieces aren't recovered and reused, they're not out of work, but it's probably good for them to do a booster now and then so they don't forget how to do it.

You've seen the plant.  It was in Iron Man 2 in 2010.  At the time Robert Downey Jr. was basing his portrayal of Tony Stark on Elon Musk.  Musk had a cameo in the movie and they asked if they could use the facility as a backdrop for the movie.

Posted by SiGraybeard at 5:19 PM