Sunday Morning at 2:42 EDT, SpaceX launched their 27th Starlink mission atop booster B1051, completing the 10th mission of one Falcon 9 booster, a number which has been an aspirational goal for the fleet.  The flight appeared completely nominal in all regards, with B1051 and the upper stage staying on the center line of their planned path, followed by deployment of the 60 Starlink satellites. And this: 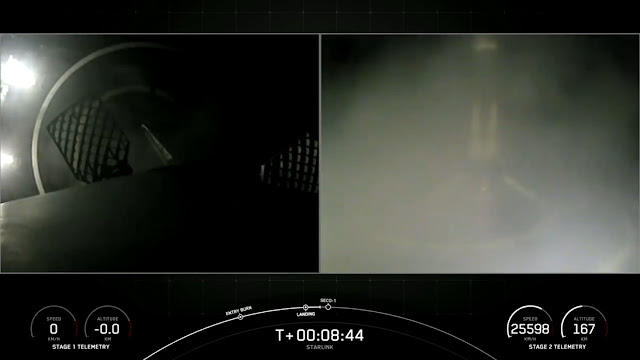 SpaceX's live webcast, screen capture, from a looping animation on Twitter posted by SpaceX corporate.  The landed booster looking down from the interstage area at the recovery drone ship's deck on the left, and a view of the booster through the smoke cloud left by the engines.

The number of ten flights was probably just pulled out of the air (PFA), as a number of launches without major refurbishment.  SpaceX Vice President of Mission Assurance Hans Koenigsman as said essentially the same. 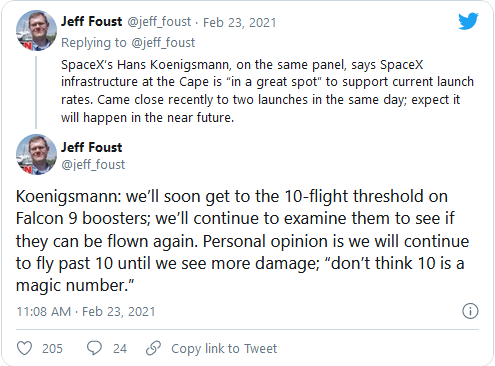 It goes without saying that this is another world record because nobody else is launching recoverable, liquid-fueled, orbital boosters.  In an interesting aside, Eric Ralph at Teslarati lets us in on some industry chatter.


For the entirety of SpaceX’s operational life, its only two real competitors have – and continue to be – US conglomerate United Launch Alliance (ULA) and European conglomerate Arianespace. Almost like clockwork, both extremely conservative groups – comprised of numerous traditional, entrenched aerospace and military contractors – have gone through a similar cycle of belittlement and dismissal, denial, goalpost-moving, disbelief, and resignation as SpaceX announced plans for reusability, began real-world attempts, and gradually worked out the kinks.

As it became clear that SpaceX would succeed in its efforts to vertically launch and land Falcon 9 boosters and ULA and Arianespace had to move their goalposts from “it’ll never work,” both generally settled on largely arbitrary claims that even if SpaceX could land rockets, reuse would never be economical. ULA went even further than Arianespace with an explicit claim – derived from armchair analysis built on opaque, unspecified assumptions – that SpaceX’s approach to Falcon reuse would “require ten [booster] uses to be profitable.” [PDF]

ULA CEO Tory Bruno's view on the economics of reusing rockets by propulsive flyback (the way SpaceX does):

"Our estimate remains around 10 flights as a fleet average to achieve a consistent breakeven point … and that no one has come anywhere close."https://t.co/uRX55vaOkP pic.twitter.com/WuKYPEpcxJ

There's a story that ULA had been analyzing an alternative approach to reuse since 2015.  It seems like an expensive, complex arrangement and it would only save the engine.  It was to be called, “SMART (Sensible Modular, Autonomous Return Technology) Reuse” and was intended for its next-generation Vulcan rocket, still working toward its first launch probably in '22.  Unlike SpaceX returning the entire first stage to a semi-autonomous drone ship, ULA would develop an extremely complex engine section that would detach from Vulcan in mid-air, deploy an experimental inflatable heat shield, and be grabbed out of the sky with a helicopter.  ULA’s original schedule for SMART reuse would would debut no sooner than the mid '20s. 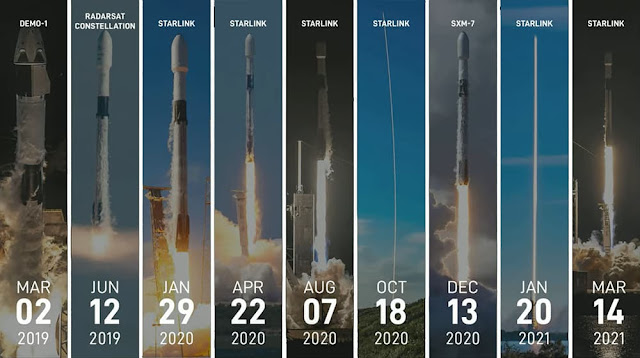