This afternoon at 5:24 PM CDT, Starship Prototype SN15 lifted off its test stand into the cloudy skies above Boca Chica, Texas.  Visibility was poor for the entire flight and the normally reliable downlink from the Starship wasn't.  As has always been the case, the flight lasted a few seconds more than six minutes and at 5:30 SN15 landed gracefully and smoothly. 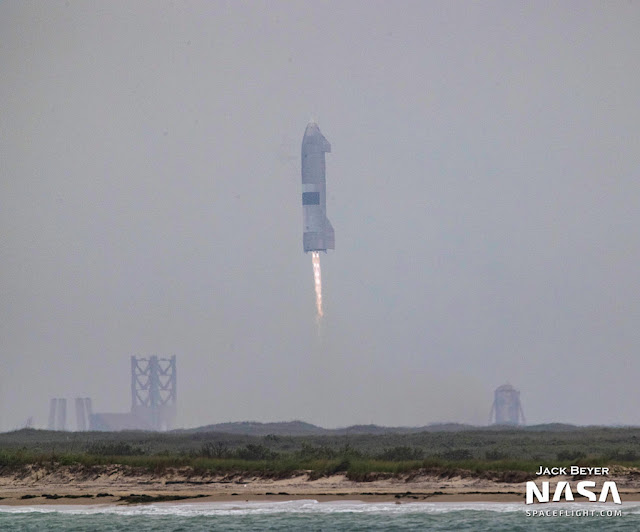 Photo by Jack Beyer, NASASpaceflight.com (as you can read).

You will note that SN15 has two Raptor engines firing; SN10, the only prototype to land until today, landed with one engine.  It landed hard, with obvious damage to some of the legs, resulting in an equally obvious tilt.  It exploded 10 minutes after landing. 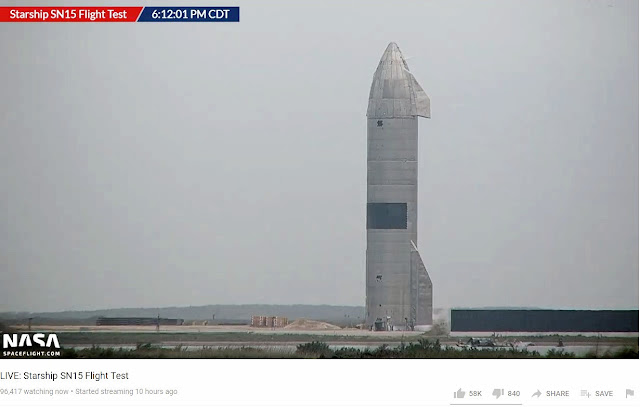 Within the first few seconds after landing, we saw a fire on the concrete at the bottom of the Starship.  Unlike SN10, the fire didn't seem to be under the skirt, and the landing pad area fire control system started drowning the area in water, eventually putting out the fire.  It was probably a minute or two, but seemed like more.

SpaceX ordinarily covers these launches at their own SpaceX.com/launches website, but it didn't show up for me until after the flight.  Their video isn't that good, it's relying on the same downlink after all, but can be seen here on YouTube, queued up to T-30 seconds before the launch.  SpaceX tends to take those down on their website when another mission takes place, while the YouTube video will be there until SpaceX takes it down.

This is a big day for SpaceX, and even for NASA, who now intends to rely on a close sibling of this vehicle to return to the moon by 2024.  There's more to learn, and I suspect the Raptor engines will be closely examined, perhaps sent to their static testing facility to learn more.  Starships are intended to be extremely reusable, more like airplanes than spacecraft; every flight that successfully lands is a step closer to that goal.  SN16 is either 100% done or close to it over in the shipyard so expect it to be on the test stand, probably within a week.

It's also a big day for the millions of us who think that not only are spaceships supposed to land standing up and be used over, but they're supposed to be shiny metal, too.

Today happens to be the 60th anniversary of Alan Shepard's first suborbital flight in his Mercury capsule, and America's first manned spaceflight.  All things considered, a bigger anniversary to be noted on this day.