The Dark Night of Fascism

There's an old wag saying that goes (with variations) "the dark night of fascism is always descending on America, but landing first on Europe".  While it has happened before, it's a bit premature to assume it will always be that way.

This weekend, the modern Greek version of the Nazi party, The Golden Dawn, advanced in their power, claiming 21 seats in the Greek parliament.  A marginal party before the collapse began, they managed to get 0.29% of the vote in the 2009 election.  Some reports are putting their portion at over 10% of the vote - over 30 times bigger in 3 years.


“Nobody can stop 100,000 members of Golden Dawn,” he said, “and if they bring tanks, they should know they (the Greek military) will be with us.” As for the election results, he said the party actually won 10 percent, not 7. Then he predicted: “The 7 percent will become 17 percent, which will become 27 percent, and then the country will pass into our hands.”

Actually, when you roll up all of the Greek minor parties, like most of Europe, they are essentially different flavors of vanilla - where vanilla is Monster Government.  There's a variety of collectivists in there, but as with that jar of mixed nuts you buy, when you get down it, they're all nuts.  These particular folks are adamantly against the reforms and financial austerity imposed on Greece.  In other words, there is no such thing as real money, real worth, real trade, just keep giving us our benefits. 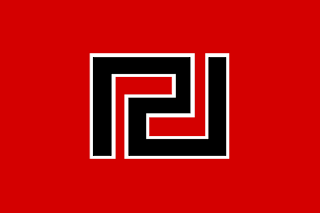 (the Golden Dawn flag.  Not too derivative...)

Speaking of mixed nuts, another case in point is "socialist" Francoise Hollande who just won the presidency in France.  I think you and I would call him a communist, but in his context over there, he's a bit less extreme.  He has already declared his answers to be "tax the rich" (gee, where have I heard that before...) and I've heard the number "75% rate" going around.  Ambrose Evans Pritchard (UK Telegraph's Business editor) quotes:


“They absolutely must cut public spending and control the debt,” said Marc Touati from Global Equities in Paris. “It will soon be clear that we are in deep recession. If they don’t act fast, interest rates will shoot up and we will have a catastrophe by September,” he said.

If you're a free market thinker, you're probably saying "75%?  That will kill their economy - knock it into severe recession".  At least, I'm thinking that.  If confiscatory taxing kills their economy, and they're one of the two remaining sticks holding the Eurozone together, the whole Eurozone collapses.

The Financial Times posts "The Analysts React" but the bottom line is that they probably don't have anybody who knows what's going to happen.  Still, let me drop a quote or two, from Kit Juckes at Societe Generale, if you can't read that piece.


The economics team have published a roadmap for the first hundred days of the Hollande Presidency. All assume he will open the debate with Merkel about slowing the austerity drive, most assume his policy bite won’t be as bad as his electioneering bark. Personally, I think we need to distinguish between the direction of policy and the macro impact of policy. What bothers many about French fiscal policy is the sheer size of the government in the economy overall. But the structural need to nurture the private sector and limit the power of the state isn’t at all the same as needing permanent austerity and economic misery. This is only important now because to argue for more austerity in Europe is just plain silly – the sort of silliness that could bring the whole thing crashing down. (emphasis in original - SiG)

The Greek result was no more of a surprise than the French one but is is a wilder card event. At the moment, it looks as though a coalition can be formed, but how long a new government could survive isn’t clear. The Greek people have spoken, but only to say they are disillusioned and angry. My bet for today is that the US, having sold risk off after payrolls that were soft but not soft to change anything, will bounce. If that happens, we will have an edgy day in which ranges hold. The catalyst for a decisive move lower by the euro remains absent, though the move is inevitable eventually.


Gang, we are talking about the collapse of the Euro.  While there is some encouraging talk to be found that says a growing number of Europeans see the EU as a disastrous mistake and want it gone before they all go down the tubes, there are still many billions of dollars/euros at stake and powerful interests who would gladly inflict incredible suffering on the people to get their way - which is to say, to get their money and power.  And in case you missed it, Peter Schiff, who's good enough at this stuff to do it for a living, says the US is not far behind and the dollar is headed for collapse, too.  The collapse of the Euro, or another Fed disaster like "The Mistake of 1937" could hasten the demise of the dollar. As CA at WSRA points out, even taken with a grain of salt, this article paints a pretty interesting picture incorporating these pieces.