About That Daytona Bar/Gun Shop Combination

While wasting time on my iPad yesterday, the Bing App's news page had a link to a story about a gun range in Daytona that is going to serve alcohol.  I'm not going to link to any of the stories, because they were all on liberal rag websites like HuffPo and featured absolutely predictable headlines emphasizing it as a stupid decision.  You can go look, if you want.

Being afflicted with the "curse of reason", I wondered what the real story was.  So I spent a few minutes to find a local newspaper with the real story.  The business is a range with added restaurant, which seems to be an idea that's becoming popular: we have one of those that just opened here in town.  The owner wants an alcohol license to sell drinks along with their food.  I have to say, I don't think you could house a range and restaurant/bar any more safely than they're doing it:


Customers could bring their own guns or rent one on site, the business partners said. If a restaurant customer orders an alcoholic beverage, his or her driver's license will be scanned by staff along with the licenses of everyone else at their table.

If the person drinking wanted to go to the gun range after eating, his or her license would be scanned again and the customer would be flagged as someone blocked from shooting because of the alcohol sale.

Since I've joined the gun club, I haven't been to an indoor "pay range" very often, but being asked for to show a driver's license isn't uncommon, so that doesn't seem like it's a new and highly oppressive.  They add several additional steps to this concept.  "He said he'll keep a watch list for customers who could be trouble and he'll contact police when necessary. Perkinson said he'll also have access to a Florida Department of Law Enforcement database."  It certainly seems like he addressed any reasonable objections.  I have to say the watch list idea is a little offensive to me, but I'm not naive enough to think other ranges don't do that.

It seems like this new system is pretty solid.  Seems like it will keep people going from drinking to shooting, but if you visited the range and wanted to stop for a snack and a brew on the way out; no problem.

Now I would do my best to never need to shoot after a few drinks, because it frankly doesn't seem like I'd be at my best.  Chances are that's a pretty easy idea to get agreement on. But this sure doesn't seem like a big deal.  Any range could have someone walk in that was just having a few beers before coming to the range.  You're less likely to deal with someone being impaired at this one. 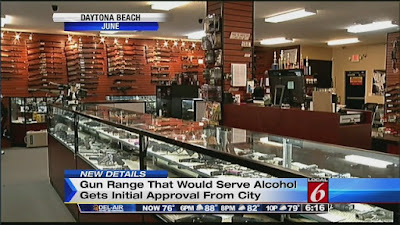 (source)
As usual, the liberal anti-gun press is full of crap on this issue.  Too anxious to condemn rather than spend 2 minutes and really learn the story.   That might require thought.