I Don't Think It's Over

The 531 point drop in the DJIA yesterday set off a lot of hand-wringing among the chattering classes.  The DJIA is down 10.1% since its May high, meeting the technical definition for a correction.  Barrons points out:

You can find any economist you want willing to say this is just a hiccup and it will recover, or that it will get worse.  For my two cents, I don't think it's over.  A 20% correction down to 14630 is not only not out of the question, it could well be the best case scenario, as I will explain.  (I recall telling Mrs. Graybeard we'd see Dow 16,000 by the end of this month, but I don't seem to have written it down anywhere).  In 2014, I posted these words from Seeking Alpha, quoting Andrew Lapthorne of SocGen.

The last time we had a 10% correction was in October 2011, about 1400 days ago.  A 20% correction would be like a reversion to the mean, which some think we're overdue for.  The concept of reversion means the longer something remains an outlier, the more likely it is to revert back to the average.  In this case, it means the longer US stocks go without a meaningful correction, the more statistically likely a meaningful correction becomes.  A 20% correction meets the definition of a bear market and would certainly be meaningful.  It would be bad but nowhere near as bad as it could be.

In the articles which I've been cautioning about a possible snap back coming this September/October, like the last one, I've been referring to this graphic from my 2014 post.  There's one little difference here: I put a red mark near where we are today.  I say "near" because the May record high was off the top of this chart, and the chart was bad enough to start with! 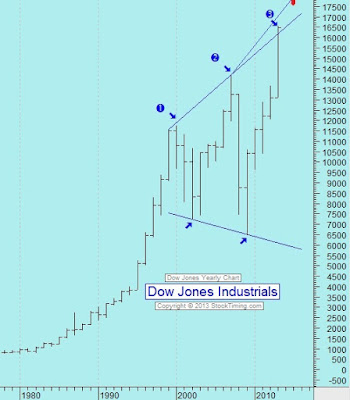 What this chart is showing is that since the late '90s, the middle of Alan Greenspan's days as Fed Head, the DJIA has been in a diverging wedge pattern: setting higher highs and lower lows.  Twice before, when it hit a new all time high, there was a snap back to a new lower low, and that was in the second year after that previous high.  Back in 2014, I was looking at that pattern and saying the previous all time peak in 2013 will lead to a snap back, probably in September or October of this year.  The target for that snap back (lower line) looked to be 6000.  Dow 6000?  There would be blood in the streets.

Has the new higher high invalidated this; that is, did it just set the snap back further into the future - and predict a lower DJIA of around 5000?  I. Don't. Know.

Notice this doesn't have anything to do with anybody's prophecies, or anything that the extremely atheistic will dismiss as "religious nut job" stuff.  This is pure technical analysis.  Read the indicators.  This doesn't require sheep entrails or any other divination, just pattern recognition, knowledge of the markets and stuff taught in any technical analysis seminar or class.  Reversion to the mean can be a nasty thing; some say that's what Greece's problems are.  The problem is that it's the least nasty of these possibilities.