Any Other Taurus Millennium Owners Here?

By now, you've probably seen the information about the liability suit Taurus lost affecting 9 different models of their "PT" series Millennium guns.  Bob Owens at Bearing Arms had it on July 28.

If I may clip text out and summarize it more,


Forjas Taurus SA has agreed to a $39 million settlement in a class action lawsuit alleging some of the company’s most popular semi-automatic handguns can discharge when dropped and have a defective safety that allows the gun to fire even when it’s engaged.

According to court documents filed May 15 in a U.S. District Court in Florida, the company has agreed to pay up to $30 million to owners of nine separate handgun models who opt to send their pistols back, with owners receiving anywhere from $150 to $200 for their pistols depending on how many choose that option.

“The Taurus Companies do not admit liability in connection with the settlement,” the official told Grand View Outdoors. “If anyone has one of these pistols, we are happy to inspect it under the warranty and suggest that they send it to us so that we can do so.” [NOTE: Taurus has apparently extended the warranty to any age gun, and is happy to do the work on a gun I'm not the original owner of - SiG]

The suit covers:
I own a PT-145 Millennium Pro, the .45ACP version, which I bought in a FTF sale back in '11.  Of course, I've never experienced the failure, but I've never dropped it.  In general, I think recalls tend to be done when defects are relatively rare.  Still, I did the online customer service chat with them and inadvertently referred to this as a recall, asking how I could tell if my model was affected by the recall.  I was informed there was no recall, but they would look it over to make sure it was OK.  They emailed me a FedEx mailer to return it.  If they're offering to take a look at it, I'm game.

If you're waiting to be contacted, I didn't get the impression they were going to do that.  At least not yet.  Maybe it was just the Instant Messenger-style chat I had, where it's easy to lose nuance in conversation, but I didn't get that impression.  If you own one and want to be involved, I'd contact them through customer service.  I suspect it will take a while to work through what has been estimated to be 100,000 guns.

The way I read that news article (essentially, Bob Owens copying Grand View Outdoors entirely), they will either repair or offer to buy your old gun from you.  Not sure which way I'd go.  There's nothing wrong with the Taurus.  On the other hand, if I took the money, I could take my "refund", add some cash and buy something better! 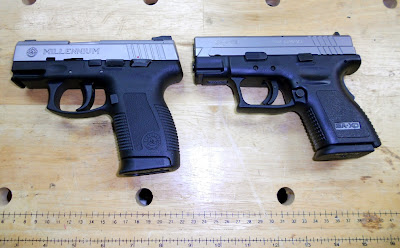 My Taurus, left with my XD subcompact in 9mm, from the post when I got the Taurus.