I'm Not Really Watching the Circus

I've paid very little attention to the circus going on in the Stupid Party.  I have very little use for the Trump circus, or the various sideshows in the 16 ring circus, but if I'm stuck at my desk for a long period of time, I will listen to talk radio.  That means I hear more of it by osmosis than by going and paying attention to it.  I went into this year knowing a bit about all of them, and thinking I'd probably vote for Ted Cruz or Rand Paul, but either way I had a lot of time to think about it.

Through all of the stuff that's been working its way into my subconscious, one candidate has stood out.  Of course I think Cruz and Paul are good - I expected them to be good.  The one who has snuck into my mind as surprisingly good, and better than I thought they'd be is Carly Fiorina.

Simply, I haven't heard a thing that she has said that hasn't sounded good.  Intelligent, economically wise, advocating points I agree with all the time.  For example, listen to this couple of interview questions on this CNN video posted to the Daily Caller.  Jake Tapper seems incapable of processing the straightforward spoken English; Carly has to clarify what I thought was perfectly understandable.  She recognizes that companies may want to offer more maternity leave as a benefit, to make the company more attractive to applicants.  I've heard her rail against over-regulation, and how much that costs businesses; that's a subject I almost preach about all the time.

I don't know much about her and with six months (?) until our primary, I'm not suggesting I'd vote for her.  All I really know is that Carly was the CEO of Hewlett Packard when the company broke up.  I don't know much about the company and what it was going through.  I had an officemate about 10 years ago who had worked for HP at the time and he didn't think much of her, but I can't say that means anything.  (For the record, if the CEO of a place I worked for was running and I told you I didn't think much of him, you'd be 100% correct to wonder if I knew anything about anything).  Her not being a politician is good.  Being someone who worked in the private sector is really good.  Having real world business experience is the complete opposite of the just about everyone in the current administration and I'm thinking anything that's the complete opposite of the current clowns would be a good thing.  Of the major non-politicians in this race, Carly, Dr. Ben Carson (whose biography we bought in the late '90s), and Trump, I think I'd go with Carly without any need for long, deep analysis. 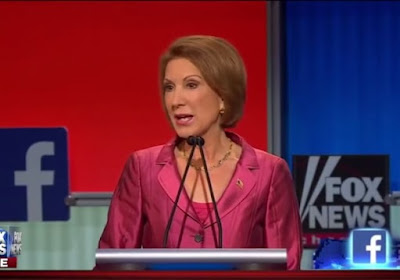 Posted by SiGraybeard at 5:51 PM