Why Does the Number 7 Keep Showing Up??

What's so important about the number 7?  Why does it keep coming up? This is the question posed by Peter Degraaf in a commentary on Kitco, posted last Thursday.


Reaching back to forty nine years ago (7 x 7), in 1966 the USA experienced a ‘credit crunch’.   In August of that year the US bond market suffered a serious ‘liquidity crisis’.

Seven years later in 1973, the world experienced an ‘oil embargo’ followed by a dramatic rise in the price of oil. There were long lines of cars at gas stations.

Move forward by 7 years and in 1980 Wall Street avoided the collapse of some of its banks and brokerage houses by forcing the Hunt Brothers to stop accumulating silver.

Another seven years passed and in the fall of 1987 stock markets crashed around the world. ‘Black Monday’ of October 1987 saw the Dow lose 22% in one day.

Then seven years later, in 1994, the bond markets crashed.

Seven years passed and in 2001 Wall Street was closed for 5 days due to the militant Islamists attack on the World Trade Center in New York.  The DOW lost 684 points on Sept 17th 2001. Banks received billions of dollars of newly created money from the Federal Reserve, to keep the system afloat.

The seven year cycle moved on and in 2008 we saw the Subprime Housing Market Collapse, along with the overnight bankruptcy of Lehman Brothers. The Lehman investment bank fell so fast, none of the employees had any idea their jobs were disappearing. The DOW lost 777 points on Sept 29th 2008. The banking system almost collapsed, (banks refused to cash checks except after a three day ‘hold’, for fear that the issuing bank might fail), but the US FED saved the day, by massive injections of newly created cash, not only into US banks, but also some Canadian and foreign banks. The debt problem was ‘solved’ with more debt!

On the 7th straight of 7 year cycles, the Dow lost 777 points??  I think if I was into numerology I'd be saying, "you've got to be kidding me!" and "are you trying for style points?"

The point of this isn't the previous 7 financial problems; the point is that it's 7 years since 2008 and conditions aren't looking very rosy.  For example, Bayou Renaissance Man and others linked to the story that "The Doomsday Clock for global market crash strikes one minute to midnight..." in the Telegraph.  Of course, I've written an acre of words on this subject.  I know I've written about expecting a crash around the end of this September recently.  I thought I said it more forcefully than this piece in May of 2014.  Looking at the diverging wedge pattern in the DJIA index, I said:


You can see that there is typically a very large pull back within these two year periods.  That will be in 2014 to 2015; for what it's worth, many big crashes tend to come in the fall, around the end of the Fed.Gov fiscal year (September 30).

I'll note that the same diverging wedge appeared in the Russel 2000 index.  Diverging wedges are generally not good.

As Degraaf points out, here we are in 2015, 7 years later, and the problems of 2008, despite (or because of ) Dodd-Frank, weren't solved, they were papered over with money printed by the Federal Reserve.


"I told them the real 2014 deficit was $5 trillion, not the $500 billion or $300 billion or whatever it was announced to be this year. Almost all the liabilities of the government are being kept off the books by bogus accounting. The government is 58% underfinanced. Social Security is 33% underfinanced. So, the entire government enterprise is in worse fiscal shape than Social Security is, but they are both in terrible shape. [On future prospects] If you take all the expenditures that the government is expected to make, as projected by the Congressional Budget Office (CBO), all the spending on defense, repairing the roads, paying for the Supreme Court Justice salaries, Social Security, Medicare, Medicaid, welfare, everything, and take all those expenditures into the future, and compare that to all the taxes that are projected to come in, then the difference is $210 trillion. That is the fiscal gap. That is our true debt."
Lawrence Kotlikoff a professor of Economics at Boston University, in testimony before the US Senate,  [emphasis in the original - SiG]

As we've said here many times, the stock market has been running entirely on the monetary creation of the worlds' central banks.  We've also talked about how creating debt to get out of debt can't work in the long term.  John Maynard Keynes once famously said, "The long run is a misleading guide to current affairs. In the long run we are all dead", as a counter to the argument that his policies would lead to destruction in the long run.  A lot of people are concerned it may now be the end of the road.  It may be "the long run". 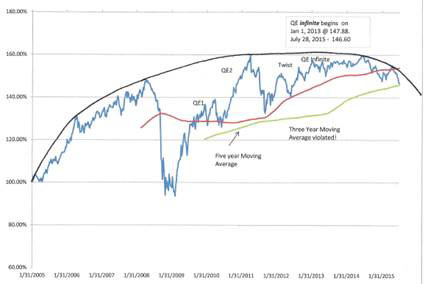 This chart is a little tough to read, but it's the DJIA values indexed with 1/31/2005 chosen at 100%, with other lines drawn on it: five and three year moving averages in red and yellow (red-ish, yellow-ish) and a black line drawn on it as an envelope to add the author's interpretation of the general shape of the pattern.  This is from another excellent piece on Elliott Wave analysis, by Jay Taylor of MiningStocks.com, which also points to likely downturns in the next several weeks.

It really seems like a time to be preparing for Bad Things.  Prepare for collision.   As Taylor concludes that second piece,


Of immediate concern is how do we prepare for the cataclysm that is to come, despite all hopes and prayers that it won’t.

We can always look at a pattern like this, of seven straight seven year cycles with Bad Things happening and say, "Past performance is no guarantee of future results".  On the other hand if seven times in a row I walked out my front door something painful happened, by the eighth time, I'd be looking out for it.