I Still Don't Think It's Over

I say it's a dead cat bounce.  This isn't even the end of the beginning.  I'm on the sidelines until maybe mid-October.

At the end of the first quarter, investors held about $24 Trillion in stocks.  Prices are down about 10% since then, so $2.4T has evaporated.  The problem with this whole $2.4 T is that it was funded by quantitative easing and zero interest rates.  It was pure fakery.  I've been beating this horse since they started printing money after 2008.

The essence of the problem in 2008 was that there was too much outstanding credit.  Corporations and people were mortgaged to the hilt and couldn't afford to add more to their payments.  Borrowing money can only move a purchase forward in time.  The classic example is buying a car by either financing it now, and paying the bank interest every month, or putting aside a few hundred$ every month for four years and buying the car for cash.  You spent the same number of dollars, didn't pay a bank or finance company anything but got the car four years later than if you financed it.  Borrowing the money to buy the car moved the purchase forward (and ended up in a lower end car due to paying that interest).

So the Philosopher Kings of the central banks said the economy needed to borrow more and started pumping out more money.  Banks got it first and they started pumping stock prices to trade back and forth.  Then it flowed to corporations who did the same.  Later corporations realized a way to make themselves look good was to borrow money at nearly zero interest and buy back their stock.  Any CEO or other executive who got a bonus based on stock price could increase demand for their stock and pump its price up.  All of the horrible market distortions of the trillions of dollars in Quantitative Easing flowed all around us.

So, while acknowledging that trying to time the market is a good way to get destroyed, my guess is it will be relatively flat for a while, until it starts to look like a "new normal".  Then the roller coaster starts again.

By the way, this is why advisers always said to diversify, and have some money in relatively safe asset classes (bonds, real estate), and some money in cash (I include gold, silver, brass, lead and other hard assets) 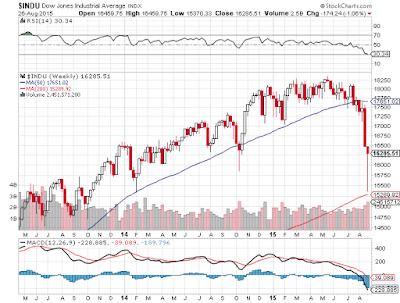 A rough observation is that the DJIA bottomed around where it was in October of '13.  At current prices, it has wiped out about 18 months of swapping back and forth.