The Single Best Way to Rip the Economy Apart

I've been thinking about this for a while, and I'm concluding that the best way to crash the economy would be to follow the Obama/Labor Unions/Hildebeest push and mandate a $15/hr minimum wage.  I think the market distortions would create literal earthquakes of disruption that would tear the economy apart.  Try this simple thought experiment: current federal minimum wage (which was never intended to be a "living wage" or pay "to raise a family on") is $7.25/hr.  $15/hr is more than doubling that, and there is a wide spectrum of jobs that make between $7.25 and $15.  By law everyone in that gap will be given a raise to $15, and everyone who worked hard, sweated hard, and got specialized training will suddenly have all of the effort negated.  They will suddenly see that couple of dollars that distinguished them from the newbies/new hires vanish and they'll be lumped together.  But, at least, they'll get something for it!  Think of the people making $15.25 or $15.35.  They will suddenly be just on the verge of being minimum wage workers.  I'd say "again" but it's possible they never worked even close to minimum wage.

You don't really need to do this as a thought experiment, and you don't need to stop at $15/hr.  It has been done at a much higher minimum wage, albeit on a small scale  Ever hear of a payment processing service called Gravity Payments?    Back in April, CEO Dan Price announced a three year plan that would raise everyone's pay in the company to $70,000/year, even volunteering to cut his own pay to do so.  This made minimum wage in that company about $35.65 an hour.  Social Justice Warriors must have been beside themselves in orgasmic fits.  Today, just 3 months later:  not so much.  Now some of his best employees are leaving, the group isn't happy and the CEO has leased out his house, living in the garage to make ends meet.  Business Insider has the story:


“Everyone start[ed] screaming and cheering and just going crazy,” Price told Business Insider shortly after he broke the news in April.

But in the weeks since then, it’s become clear that not everyone is equally pleased. Among the critics? Some of Price’s own employees.

The New York Times reports that two of Gravity Payments' "most valued" members have left the company, "spurred in part by their view that it was unfair to double the pay of some new hires while the longest-serving staff members got small or no raises."

Maisey McMaster — once a big supporter of the plan — is one of the employees that quit. McMaster, 26, joined the company five years ago, eventually working her way up to financial manager. She put in long hours that “left little time for her husband and extended family,” The Times says, but she loved the “special culture” of the place.

But while she was initially on board, helping to calculate whether the company could afford to raise salaries so drastically (the plan is a minimum of $70,000 over the course of three years), McMaster later began to have doubts.

“He gave raises to people who have the least skills and are the least equipped to do the job, and the ones who were taking on the most didn’t get much of a bump,” she told The Times. A fairer plan, she told the paper, would give newer employees smaller increases, along with the chance to earn a more substantial raise with more experience.


“I’m working as hard as I ever worked to make it work,” [Price] told the Times in a video that shows him sitting on a plastic bucket in the garage of his house. “I’m renting out my house right now to try and make ends meet myself.”

The Times article said Price’s decision ended up costing him a few customers and two of his “most valued” employees, who quit after newer employees ended up with bigger salary hikes than older ones.

“He gave raises to people who have the least skills and are the least equipped to do the job, and the ones who were taking on the most didn’t get much of a bump,” Gravity financial manager Maisey McMaster, 26, told the paper.

She said when she talked to Price about it, he treated her as if she was being selfish and only thinking about herself.

“That really hurt me,” she said. “I was talking about not only me, but about everyone in my position.”

“Now the people who were just clocking in and out were making the same as me,” he told the paper. “It shackles high performers to less motivated team members.”

There's a lot more texture between the various sources (and H/T to the Young Conservatives for  starting me down the trail) but it's the reality of market driven wages, workers driven to succeed, and well-intentioned but clumsy attempts to "do good".  It might be a rough transient for Gravity and Dan Price, and maybe they'll recover just fine, but it might also be the blow that will destroy the company. As a business, of course, they're free to pay anyone anything that both parties agree to, at least in my way of thinking.  I do think it's a potent message about doubling the minimum wage, though.

And these people wouldn't have had to deal with the inflationary consequences of a minimum wage increase.  This is the voluntary actions of one company, not the sledgehammer of Federal Law.

Checking my blog archives, I see I've written on this several times.  I shouldn't really repeat them, but if you want more info, check out "Econ 101- Minimum Wage Style" and "Fundamental Transformation".  Both address aspects of raising the Min Wage to $15 that I don't address here. The first one talks about the inflation this would cause while the second talks about real impacts on unemployment, showing measured data on the enormous impacts measured in California - more unemployment and more misery for everyone, but especially those demographics they say they're trying to help. Yet a third piece, "Economics 101 - An Example of Political Stupidity" includes snippets of a great piece by Thomas Sowell. 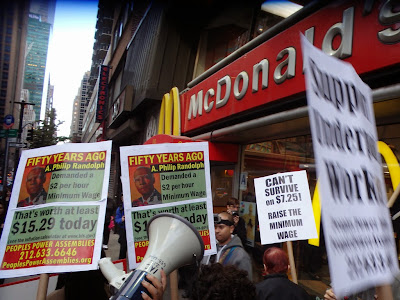 (Commieus americanus var. laborus)
To quote myself just a little, I get tired of arguing this point because (1) we're always right and (2) then they raise minimum wage anyway and we suffer the consequences we told them would come.

People with no understanding of Economics insisting that raising the minimum wage will help them are like the people who insist gun free zones protect their kids at school.  They just can't get past the first idea to ask "then what happens?".