Techy Tuesday - Candidate for Dad of the Year 2015

Last March I saw an article on the simulated moon launch console a dad made for his kid.  Most impressive Dad of 2014.

It's a new year, though (and mostly gone, too) but I think I have found 2015's Dad of the Year.  Check out what he built for his 1 year old Princess: 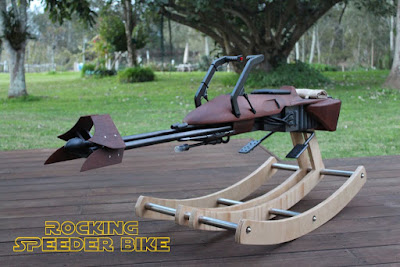 If you remember the last of the original Star Wars trilogy, the one with the Ewoks, formally known as Return of the Jedi, you'll recognize the speeder bike instantly.

A young dad named Tez Gelmir designed and built this and posted instructions on Instructables.  Through a combination of plywood, hardware store supplies, 3D printing, woodworking and electronics hardware, he brought it to life.


I see the overall design as three main parts, firstly the speeder bike its self (the hull etc); secondly the rocker arms/frame and thirdly the electronics.


To the hardcore techies out there: I realize this is a little low/old tech for these weekly rambles into whatever cool tech industry news crosses my desk, but (1) it's a good example of combining lots of home-level tech into something useful and (2) it's cool.  "Straight up Maker" in my mind.

Go check out his Instructables page.  He's got a video, too.