The Coming Crisis In State and Local Government Finances

There seems to be a common thought that since states and local governments are required to balance their budgets, that they're relatively fiscally sound.  Folks seem to think the states should be relatively unaffected by the coming collapse of the dollar.  A little thought should dispel that idea: everyone knows that the feds essentially blackmail the states by handing over money for the Feds' pet projects, as long as the states/locals do something else the Feds want; this helps finance the states' expenses.  Unfortunately, it's worse than that.

Charles Hugh Smith "Of Two Minds" blog takes a look at the coming crisis in state and local government finances.  As he puts it, "Strangely enough, every easily foreseeable financial crisis is presented in the mainstream media as one that “nobody saw coming.” No doubt the crisis visible in these three charts will also fall into the “nobody saw it coming” category." The first chart may tell the whole story, or at least most of it: 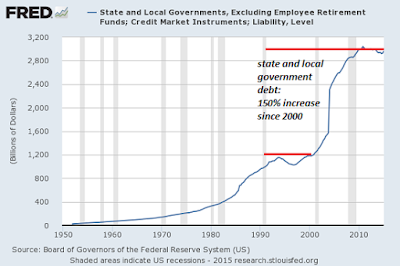 State and local government debt, excluding employee retirement funds (which everyone was talking about a few years ago) and a few other line items, has gone up 150% since 2000.  Nominal GDP rose about 77% since 2000. So state and local debt rose at double the rate of GDP. That is the definition of an unsustainable trend.

At some point, borrowing becomes impossible (or prohibitively expensive) and the only trick left is to raise some taxes.  Unfortunately, that well is empty, too.  Taxes have gone up at essentially the rate of GDP growth: 75% instead of 77%. 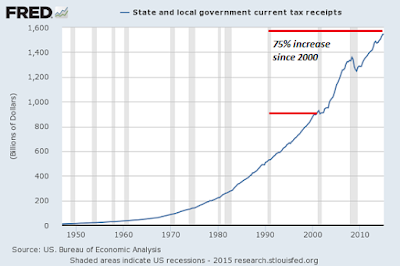 Even worse, the Expenses have gone up more than the taxes, 82% vs. 75%, making the situation worse every day.  When the housing bubble popped in '07-'08, that reduced property tax revenues, squeezing the local governments harder.  The real problem though is the decrease in household income to pay those taxes; the taxpayers are getting squeezed. 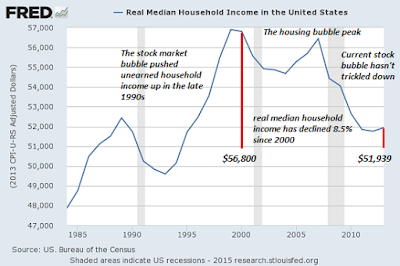 As Charles Hugh Smith puts it:


Wages and salaries are barely keeping up with inflation, real household incomes are down 8.5% since 2000 and state and local government taxes and spending are rising at twice the rate of inflation--where does this lead to?

1. The bond market may choke if state and local governments try to "borrow our way to prosperity" as they did in the 2000s.

2. If state and local taxes keep soaring while wages stagnate and household income declines, households will have less cash to spend on consumption.

4. In recessions, sales and income taxes decline as households spending drops. This will crimp state and local tax revenues.

5. This sets up an unvirtuous cycle: state and local governments will have to raise taxes to maintain their trend of higher spending. Higher taxes reduce household spending, which reduces income and sales tax revenues. In response, state and local governments raise taxes again. This further suppresses disposable income and consumption. In other words, raising taxes offers diminishing returns.

When borrowing become prohibitive (or impossible) and raising taxes no longer generates more revenues, state and local governments will have to cut expenditures. Given their many contractual obligations, these cuts will slice very quickly into sinews and bone.

State and local governments have to balance budgets, but they're not all in strong financial shape.  What we have here is another one of those situations that just can't keep going the way that it has been going.  Continuing to spend more than income is the very definition of unsustainable.  And we all know things that can't go on won't go on.