I've backed a project or two on Kickstarter, so I get their weekly emails on Thursdays.  Today's email floored me with two incredible smugness generators aimed at the greenies.  The biggest is a Steam Ring generator for the world's cleanest power plant.   The text reads:


By 2017 the citizens of Copenhagen will not only be able to ski down the cleanest power plant in the world - their perceptions of what a power plant can be will be challenged by an art piece that raises awareness of our carbon emissions. The world’s first steam ring generator will puff out a steam ring for every ton of CO2 burned in the plant.

Wait... whut?  "Every ton of CO2 burned in the plant"?  CO2 doesn't burn.  If they figured out a way to burn CO2, I have to confess that would be pretty darned remarkable.

The whole thing blows my mind.  They're going to generate steam to blow rings?  Steam is valuable stuff, in the industrial sense.  It sure isn't lying around doing nothing; it shouldn't be waste.  It's not waste heat from the plant because the Kickstarter page is to design the steam ring generator itself.  Some sort of energy has to be used to heat water to generate steam; are they going to burn fossil fuels?  No,.. wait.  It says something about that plant being the "cleanest power plant in the world", so that must mean it's going to be nuclear.  A nuclear powered steam generator for ... an aesthetic project?

When something makes that little sense, I figure its purpose in life is to be a smugness generator, so the people around the power plant can feel just so much better than those other people.  They're using clean energy and are showing you just how much cleaner they are than you.  How much is smugness worth to you? 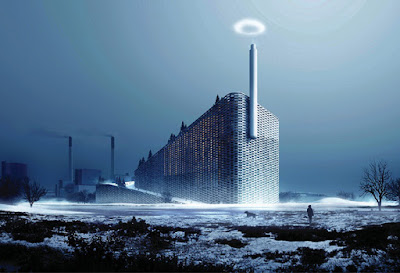