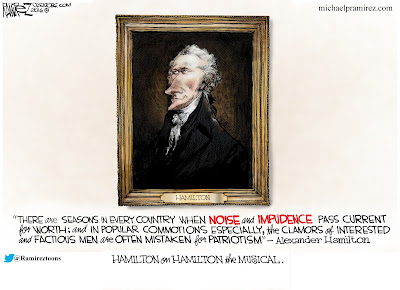 (Michael P. Ramirez cartoons, but you knew that.)  Years ago, I heard that there's a saying in show business that goes, "make 'em love you or make 'em hate you, but make sure they never forget your name".  I suppose I don't know whether that's true or not, but it affected how I think of the business.

That's why I won't use the names of the cast member from Hamilton who came out and lectured the vice-president-elect.  I don't want to increase their fame by the tiniest amount.  If this was done as a publicity stunt, it certainly has gotten them tons of publicity.  By that quote, it doesn't matter to them that there might be negative publicity.  I'm sure that to them the right people were pleased and the right people were angered.  What's next?  Do we get lectured at grocery stores?  Car washes?  A guy had the crap beaten out of him, was carjacked and dragged a mile because they thought he voted improperly.  (I'll note that these attackers were not charged with a hate crime).

No one doubts that these actors have the right to express themselves; it's the situation.  A guy takes a break after a grueling several months of nonstop work and goes to take in a play, only to get lectured to by a group of Speshul Snowflakez (tm) who are upset because the candidate they wanted (but apparently couldn't be bothered to vote for) didn't win.

It's just plain rude.  You're the stars: send Mr. Pence a note saying you'd love to see him backstage after the show.  It's called manners, actors.  You should look it up.  Show some class for once.

Labels: commies and other idiots, Events