Are These The Thinnest Wires Physically Possible?

That's what the folks at the Stanford Linear Accelerator Center (SLAC) are saying.  This week's EE Times picks up the story.


SLAC has demonstrated what it claims are the thinnest possible nanowires — just three-atoms thin. SLAC's process uses the smallest possible fragment of a diamond — called a diamondoid — as an insulating shell into which the copper/sulfur atoms self-assemble. The world's smallest diamondoid — an adamantane with just a 10-atom circumference — allows a three atom conductive core to self-assemble to any length.

Seems tough to imagine they can get much thinner than three atoms, with a 10-atom insulating sheath on it.  I'm sort of surprised that with only three atoms across the nanowires exhibit the macroscopic properties of ordinary insulated wire, and not bizarre quantum superposition of properties.  You're not going to be using your Stripmasters on these anytime soon.

The paper is published in Nature Materials (paywall for worthwhile content) and focuses on the self-assembling properties that combine these small pieces of conductor, each bound to an insulating particle of diamond (pure carbon).  The conducting portion is copper sulfur atoms, shown here as sulfur in yellow and copper in reddish brown.  The gray scaffolding is the carbon atoms - the diamond.

The key here is literally finding the right ingredients.  Then they're put in a vessel on the desktop and the experimenter just sits and watches as the wires self-assemble.


The simple "beaker" process used to form the nanowires, created by the SLAC researchers, merely involves putting the correct materials in solution with the diamondoids and within a half-hour, the nanowires begin self-assembling as long as the materials last.

The nanowires even help the experimenters out after the "watch the magic" phase.  They diamondoids have a high attraction to each other and so it's easy to gather them. 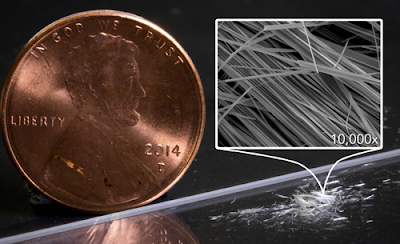 The diamondoids themselves are found naturally occurring in certain petroleum products, making the process relatively inexpensive to execute. Stanford researchers have already found other uses for the diamanoids in improving electron microscope images and in the construction of tiny electronic devices.  Sulfur and copper are both abundant, cheap components, so this looks like it could be an economical way to manufacture wires for even smaller semiconductors than are currently in development.  The team has already fabricated similar nanowires using cadmium for optoelectronics applications, zinc nanowires for solar applications and piezoelectric materials for energy harvesters.