It's The Time of Year To Talk About the C Word

I love Christmas.  I mean, I've run across people in my life who decorate for Christmas way more than I do, and I've known people who plan their Christmas six months in advance, way before I do.  I know a guy whose house decorations for Christmas put the local shopping centers to shame, and focused his whole year around Christmas.  Maybe if you saw me, or saw my barely decorated little house, you wouldn't think so, but I do love Christmas.

Christmas is unique among holidays in America.  It has a very strong Christian tradition (well, duh!) as well as very strong secular traditions, and I love them both.  I love giving gifts to loved ones - and even total strangers.  I love the old favorite songs and the whole feeling of this time.  People in retail will tell you that Christmas often determines whether or not they stay in business.  I'm sure you've noticed that news outlets report sales from the Friday after Thanksgiving (Black Friday) as if they're reporting scores from a bowl game.  Another part of the holiday is the annual struggle to "keep Christ in Christmas" and not overlook the spiritual side of the holiday.  Did you know there is actually a court ruling that tells you how many reindeer (three) a holiday display must have to remain "sufficiently secular" to be legal to display on public property?  If I'm putting on a public display and among all other other Winter Holiday symbols I have three reindeer on display, it's secular; if everything else is the same but it's only two reindeer and package of reindeer sausage, I'm obviously trying to convert you!  Does it get more stupid than that?  On second thought, don't answer that.

Other than the perpetually aggrieved people who protest everything, who's offended by someone wishing them happiness?  For years, I used to run this video by Jackie Mason saying as "The Ultimate Jew" he wasn't remotely offended by people wishing him a Merry Christmas.

Some time ago, I must have filled out a survey or signed some stupid online petition or something, because I get junk mail from the American Family Association.  A few years ago, I got an email asking me to boycott Dick's Sporting Goods because they won't prominently display "Merry Christmas".  I'm not really offended by a store not having prominent "Merry Christmas" displays.  People shouldn't go to stores for spiritual displays.

See, the reason I would go to Dick's is if they happen to have something I'm looking for as a gift and it's a great price.  This is purely the secular celebration of Christmas; I'm not going there for spiritual reasons.  I would prefer they used the phrase Merry Christmas, but I'm not offended if they don't.  If they told me to "eat sh*t and die", they'd offend me and you can bet I wouldn't go back, but if they're neutral about "Merry Christmas", I don't really care that much.

Here's where it gets a little dicey.  We have a Bass Pro in town (who got an "A+" rating from the AFA for saying Merry Christmas a lot) and a Dick's Sporting Goods.  I would go to Bass Pro because I'd prefer to go to someone with comparable merchandise and comparable price that was friendlier to my spiritual side.  It creates a more cozy environment and a smart retailer doesn't run off customers.  But life in 21st century America is plenty hostile to Christianity and a "happy holidays" from a store just isn't worth getting all worked up over.

By the way, a mere five hours after the AFA email asking me to boycott Dick's, I got a second email canceling the boycott.  They swear they're going to say Merry Christmas all the time.

As we plunge further into the Christmas season, take time to enjoy it and your loved ones.  If you feel a need to get some perfunctory gift for someone you'd really rather not give to, I say don't.  That's some sort of bizarre social ritual, not Christmas.  Don't put yourself in debt for Christmas; even if it means the kids get a "meager" holiday.  It won't hurt them and may just help them.  If you're one of the 45% who recently said they'd just as soon skip the whole thing - I say skip it.  It's still a federal holiday, so you have that going for you. 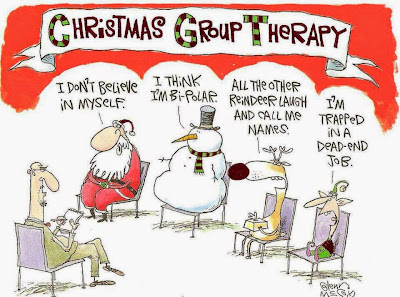