On a completely different note, we took a few hours Monday afternoon and went to see the big budget sci-fi movie Arrival.  Longtime readers probably know that my preference in movies is the Marvel Cinematic Universe: the Avengers, Iron Man, Thor, Ant Man, the whole bunch.  Yeah, we caught Dr. Strange on the first weekend, too.  I will go to see occasional others, but they are largely comic book movies, or action movies like the Bond universe, Mission Impossible, and that sort.

Arrival is not that kind of movie.  It's definitely not your typical alien or first contact movie; there were giant spaceships, but there were no explosions.  New York City wasn't pulverized, nor was Tokyo, London or other world capitals.  Instead, it ends up being well done sci fi that gives you something to think about.  It goes after some traditional sci fi questions like the nature of time and reality, but looks at the role of language in how we experience those.  After we left, Mrs. Graybeard and I both said it wasn't what we were expecting, but it also wasn't what we were afraid it might be.  We had heard that the main message of the movie was communications and how if we could communicate better, we'd all get along, and have world peace because kumbaya or something.  That message was sort of in there, but so was the message that, historically speaking, primitive societies meeting much more advanced ones don't do very well.  Neither was a hyped, main message.

The movie stars Amy Adams and Jeremy Renner, but it really is the Amy Adams show.  I only know her from playing Lois Lane in the latest re-telling of Superman, "Man of Steel", but she does well.  I like Jeremy Renner, but his character is supporting to hers and Forest Whitaker is almost non-existent as a character.

In the interest of not doing spoilers, I'll leave it there.  On 1-10 scale, I'd give it an 8 to 9.  There were some things that seemed out of place or silly, but not much. 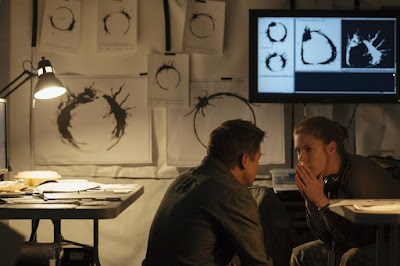 Jeremy Renner and Amy Adams, as they're trying to understand the symbols the aliens use to communicate.