Yeah, a bit late, but if you're getting down to the last week and wondering what to get someone with an unnatural love for tools and gadgets, Machine Design comes to the rescue with a half dozen little tech toys.  I have to admit some of these seem like "why'd you put Bluetooth in that?"..."because we can".  But maybe that's just me.


The big idea here is tracking your battery packs for your battery powered tools.  Not a big concern?  Not for me, but I can imagine it might be handy if you're on a jobsite and have tools wander off, or maybe have a few teenagers at home who might borrow a tool and never let you know where it is.  Smartech gives you the ability to pick up your phone and disable the batteries to all your tools.

Obvious disadvantage here: It's Bluetooth and that's designed to be useful over short ranges (a Personal Area Network).  Once the battery and phone are out of Bluetooth range, users aren't able to lock a battery or locate the Smartech battery by triggering it to emit a sound.

Now, I can see a design choice here that I'm frankly happy they didn't make: allow batteries to work only if they're in range of the App controller.  That way if someone walks off with your tool, it won't work.  On the other hand, that sounds annoying; what if I'm somewhere outside and need a tool?  Now I need two tools, my drill and my phone.


Since DeWalt is owned by Stanley Black & Decker, you'd think they'd have a similar or identical tool connect system.  They seem to be holding to the distinction, though, that DeWalt tools are more aimed at "professionals" than B&D and added more features to their program.  DeWalt's monitor offers temperature notifications in case the battery gets too hot while charging. While both this tool and SmarTech enable and disable the battery pack, the DeWalt tool reportedly has a notification that can alarm the user if a battery goes outside of Bluetooth range.

One Key by Milwaukee


At first, this one sounded pretty dumb, but the more I thought of it, the more I thought there's a decent idea in here.  The Milwaukee One Key is connected to the drill, not the battery. As a result, users can (not must) control the speed and torque with their phones. At first, this sounded inconvenient.  Why would you reach for your phone when there's an adjustment right on the drill in your hand?  One reason is, “because it’s there.” Another reason is there is a preloaded library in the app that includes common fasteners. If you don’t know the torque or speed to use on a wood screw or a concrete anchor, the app will set the drill automatically.  Ever rip the head off a small screw driving it into oak?  DAMHIK.

Now personally, I usually leave mine set to maximum torque (which is a lower speed setting), but every rational brain cell I have tells me that's stupid.  I have turned many Phillips head screws into screws with an irregular cone bored into their heads (and turned a few screw driving bits into abstract art, too).  According to the company, the end result is reduced fastener stripping, breaking, and material damage. I believe it just might.

There are other tools coming that it will work with: they list a reciprocating saw, and a shop light. 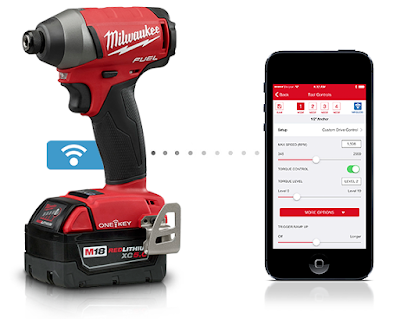 
Those of us older than about 40 (as a guess) will remember when we had one drill, usually 1/4" drive.  It was plugged into the wall, and we interchanged things that attached to the chuck - besides screwdrivers (which I don't recall at all).  The point is that motors were expensive and batteries that would drive them were so much more expensive that you didn't even have one.  I recall polishing pads and car wax buffers, but there must be some of you who remember more.  You put cheap attachments on the motor you had because a motor driven tool like a car buffer was outrageously expensive by comparison.

Today, motors and batteries are both cheap and Matrix takes this full circle. Batteries aren't very reliable, and that leaves the motor as the longest-lasting part of the tool. Matrix swaps out the front part of the tool and leaves you with the motor.  By having multiple tools fit onto a single motor, the Matrix Quick Connect System can reduce the cost of a new attachment. In addition, when the motor stops working, the user can simply replace it versus the entire product. Your replacement is a battery when it stops taking a charge, and your motor can drive a handful of different tools.


Ryobi puts their twist on this "add apps to your phone for your tools" thing by making the phone the "tool" in the sense that you add something to the phone and the combination of the phone and "added on thing" turn into the tool.  There are add ons that make your phone a laser level, wood moisture meter, stud sensor, water level sensor, IR thermometer, and a few more.  Interesting, but (to me) a bit less practical than some of the others.

CoolBox - isn't real yet; it's on Indiegogo


This one deserves to bring up the rear because it's not a real product, and it's not all that innovative either.   It's a 22-in. long, 12-in. deep, and 9 ½-in. tall toolbox that offers a built-in rechargeable battery to charge electronics. The battery is connected to a 11.1-V, 3-Ah plug, so it may not power anything serious.  It might keep your phone charged, or its own Bluetooth speakers, but that's all.  This just seems like a toolbox for hipsters who put together the occasional piece of Ikea furniture.  (Was that snarky enough?)


There you have it.  I think it's an interesting collection of tools and accessories, for those of us who still make things.