Привет  I was taking a look at my blog stats today for a totally unrelated reason and noticed a large spike in visitors from Russia, similar to what a few of us saw when I wrote about this last August.  The #2 country visiting my blog is Russia this week.  It's not as big as that week, when Russia actually took the #1 spot, but check this from about two hours ago: 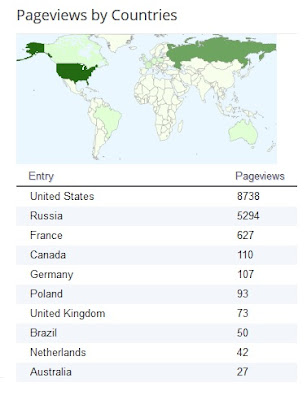 If I look at the numbers for last month, that number of Russian visits go up only by about 60, so all of those 5294 are within the last week.  I can tell from Blogger that they're all not today but no more details.

The makeup of page views is unremarkable in that the most viewed post is last week's post on Employment vs. Robots, which didn't mention Russia in any way.  It's hard for me to see anything unusual here, and I have to wonder if it's a Google artifact.  If any visitors from Russia would care to leave a comment on what they came to read about, I'd appreciate it.  Or, as the translator in the Bing search engine says:

Last August, both Sense of Events and Abode of McThag reported the same thing, then several people said they were seeing a spike from Russia in the comments.